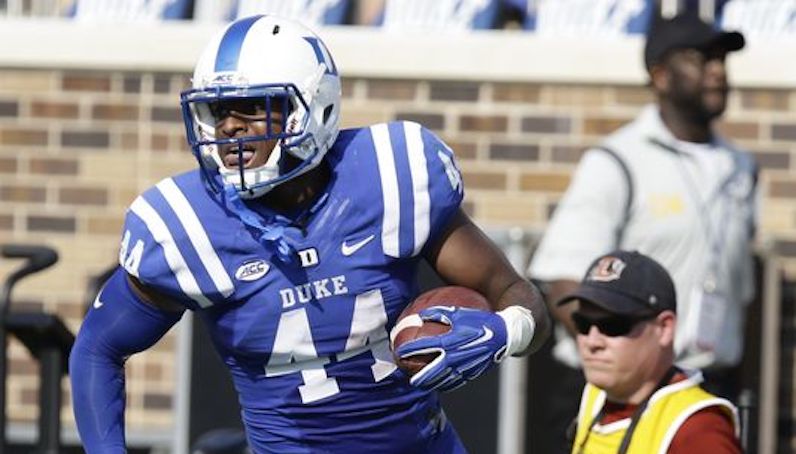 Joe Giles-Harris is a force in the middle of the field for Duke football on defense. (AP Photo)

In his second season as a starer, Duke’s Joe Giles-Harris continued to get better. During the 2017 season, Giles-Harris finished third in the ACC with 125 total tackles (9.6 per game).

A short step beyond

Playing alongside Ben Humphreys, Joe Giles-Harris helped power a run defense that ranked inside the top 50 of the FBS in S&P-plus, Success Rate and isolated points per play, according to Football Study Hall.

Opposing teams got five or fewer yards on 65.2 percent of their carries against Duke, per Football Study Hall, which ranked 33rd nationally in Opportunity Rate. Giles-Harris was obviously a major part of that initiative.

According to Football Study, Giles-Harris recorded 24 runs stuffs. These are players when a defenders tackles a ball-carrier at or behind the line. (These are different from tackles for loss — number includes carries/stops that went for zero yards.)

That number from JGH ranked second in the ACC last season — behind only NC State’s wrecking ball Bradley Chubb, the No. 5 pick in the NFL Draft. Chubb finished with 27. Only two other ACC players finished with at least 20 run stuffs: Boston College’s Zach Allen and Tremaine Edmunds of Virginia Tech, another first round pick in last month’s draft.

Overall, Duke ranked 20th nationally in defensive efficiency, according to ESPN. Without adjusting for pace, the Blue Devils finished seventh in the ACC in run defense (153.2 yards per game) and third in scoring defense (20.2 points).

With Giles-Harris back at weak-side linebacker, plus tackle-machine Ben Humphreys back in the middle, Duke should once again be a force defensively. That equation, of course, includes a defensive line — led by Edgar Cerenord, Tre Hornbuckle and Victor Dimukeje — and a strong secondary (No. 8 in the FBS in Havoc Rate, 2017), too.