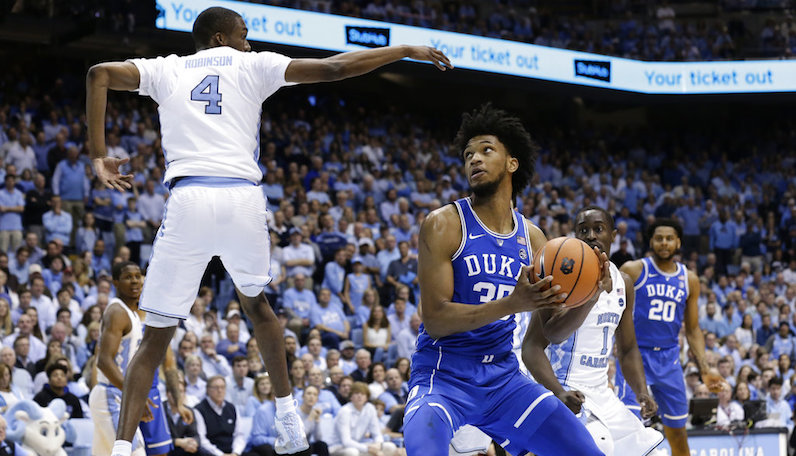 Heading into the weekend, nine ACC programs are currently projected as NCAA Tournament teams, per BracketMatrix.com. Virginia is in line to get a No. 1 seed — the second overall seed, just behind Villanova. Duke and Clemson are slotted as No. 2 seeds.

This is a new weekly feature from the ACC Analytics tab — one key stat to know about each projected team, and why that matters going forward.

Tony Bennett deserves plenty praise for helping guide No. 2 Virginia to an incredible 23-1 record. Make sure to also give Bennett and his staff credit for another thing, too: after timeout execution.

On after-timeout plays, UVA scores 1.03 points per possession — on 48 percent shooting (56.1 percent effective), per Synergy Sports. That ranks 15th nationally and No. 1 in the ACC. This is a benefit of having a roster with several skilled shooters: Kyle Guy, Devon Hall and Ty Jerome.

In the loss to North Carolina on Thursday night, Duke’s Marvin Bagley scored 15 points on 7-of-13 field goal attempts. Bagley, of course, got most of his work done in the post. According to Synergy Sports, Duke used just nine post-up possessions in the game; six of those went to Bagley. Wendell Carter recorded just one post-up possession.

Bagley connected of 5-of-6 post-up attempts — with UNC’s Theo Pinson serving as the primary defender. Simply put: that’s not enough volume. Duke needs to find additional ways to get Bagley and Carter both involved on offense.

In the first game after Donte Grantham’s ACL injury, Clemson was suffocated by Virginia’s No. 1 defense — scoring just 36 points. Since then, though, Clemson’s offense has been dynamic. Led by its trio of guards — Shelton Mitchell, Marcquise Reed and Gabe DeVoe — the Tigers have picked it up on offense.

In four straight games — wins over Georgia Tech, UNC, Wake Forest and Pitt — Clemson has scored over 1.1 points per possession. That’s not the stiffest of defensive competition; however, well done by Brad Brownell and his team.

North Carolina turned the ball over just two times in the team’s win over Duke — a turnover rate of three percent, according to KenPom. According to Sports Reference, this was just the 62nd time since the 2010-11 season that a Division I team has recorded two or fewer turnovers in a game.

With Bruce Brown out of the lineup, Miami has received contributions from a variety of players — Lonnie Walker, in particular. Walker has an effective field goal rate of only 43.1 percent this season, per Synergy. In the win over Wake Forest, though, Walker scored a team-high 19 points.

Walker has hot on spot-up opportunities against the Demon Deacons: 3-of-4. Two of the three makes were assisted by fellow freshman Chris Lykes off the the pick-and-roll.

Junior center Christ Koudmadje sustained a lower body injury back in November — during non-conference play. Koudmadje returned in early January, and has been a factor ever since.

The 7-foot-4 Koumadjue knows his role: occupy the space around both rims. A constant lob threat, Koumadjue leads the ACC in conference play with a 65.6 percent shooting clip. While on the floor this season, the 7-footer has blocked over 10 percent of opponent two-point field goal attempts, per KenPom.

According to Sports Reference, Koumadje is the only ACC player with a block rate of at least 10 percent, and a field goal percentage above 64 percent.

Florida State ranks 50th nationally in block rate — 7.4 percent. However, with Koumadje back in the rotation, and playing more minutes (23.8 over FSU’s last four games), expect that to rise.

Welcome to the No-Fly Zone: Louisville Basketball, 2017-18. According to KenPom, opponents have an effective shooting rate of just 45.3 percent against Louisville — which ranks eighth nationally. A big part of this is the fact that opponents are shooting a minuscule 43.7 percent on two-point attempts.

Related to that: Louisville ranks No. 8 in the nation in block rate — 16.2 percent. If this sticks, this would be the highest block rate of the KenPom era for the Cardinals — tracing back to the 2001-02 season. Anas Mahmoud ranks 12th nationally with a rejection rate of 12.3 percent; elastic defender Ray Spalding isn’t too far behind — 7.2 percent, No. 86 in Division I.

Change is aplently in Raleigh this season as NC State basketball transitions into the Kevin Keatts era. One of the big improvements in half-court offense: utilizing the roll man.

Sophomore Markell Johnson has emerged as one of the league’s top pick-and-roll distributors; on the receiving end, Omer Yurtseven and Lennard Freeman have cashed in. According to Synergy, NC State rollers have scored 157 points this season (1.17 points per possession), which is the most in the ACC. (Last season, with Dennis Smith Jr. at the controls, NC State’s offense scored just 0.84 points per possession on roll man possessions.)

Yurtseven and Freeman have combined to shoot 70.8 percent and score 1.36 points per possession on basket rolls this season, per Synergy

The Hokies have connected on 39.8 percent of their three-point attempts this season; according to KenPom, this ranks 23rd in the nation. Virginia Tech as scored 1.13 points per possession on spot-ups this season, which ranks No. 9 in Division I basketball.

Currently, there are 26 players in the ACC shooting at least 38 percent on at least three three-point attempts per game. Led by Ahmed Hill (5.8 3PA, 42.8 3P%), Virginia Tech has four players on this list — more than any other program.