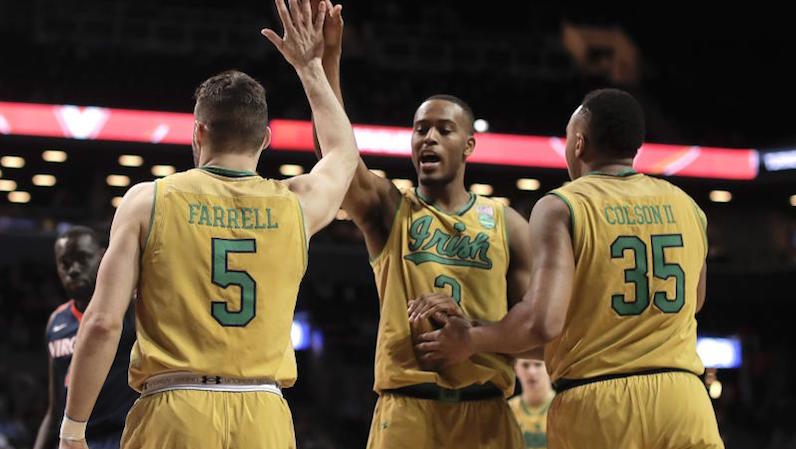 Notre Dame’s NCAA Tournament run and season came to a screeching halt early Saturday afternoon at the hands of West Virginia. The Fighting Irish never looked their best in March Madness, which unfortunately coincided with the late-season shooting decline of Steve Vasturia and V.J. Beachem.

All season long, Notre Dame was a well-oiled machine scoring the basketball. Matt Farrell and Bonzie Colson pick-and-rolls powered the offense, while the shooting of Vasturia and Beachem — constantly in motion, running off down and flair screens — opened space in the middle. It was a brilliant formula, and good enough to land the Fighting Irish in the top 20 of KenPom’s offensive efficiency ratings for the third straight season.

However, Notre Dame’s offensive equation did not leave a lot of room for error. Freshman Temple Gibbs was the team’s leading bench scorer — 4.7 points per game. According to KenPom.com, Notre Dame’s bench played just 22.2 percent of the team’s available minutes, which ranks No. 341 in the nation. Basically, the team had four scorers and a limited bench; Mike Brey needed all four of those guys hitting shots. If not, well, things got dicey.

Over the final 11 games of the season, Vasturia shot 39.4 percent from the floor and just 25 percent on three-pointers. Notre Dame managed to win nine of those games, but in the two losses — at Louisville and against West Virginia — Vasturia went 7-of-21 from the field, including a combined 1-of-9 from beyond the arc. In the team’s too-close-for-comfort first-round victory over Princeton, Vasturia shot just 3-of-12.

Beachem was right there with him

Beachem shot 39.5 percent from distance in ACC play, which ranked 22nd in the league. That is pretty darn solid, but over the final eight games on the season, Beachem regressed: 34 percent shooting, 25 percent on threes. Beachem got up seven three-pointers per game in that stretch but made just 14 of 56 triples.

In the NCAA Tournament, Beachem and Vasturia went a combined 10-of-44 (22.7 percent). Despite the heroics of Colson, Notre Dame was outscored by its opponents by 10 points.

Two games, however, does not make a career

Make no mistake, Beachem and Vasturia are two of the most accomplished players of Brey’s tenure at the program. Both scored 1,200-plus career points, and Notre Dame won 68 percent of its games the last four seasons. Notre Dame was the only program to make it to the Elite Eight in both 2015 and 2016. But unfortunately for the Irish, their shooting fell off a cliff toward the end of the 2017 season.

Notre Dame will reload in 2017-18; Farrell and Colson will be back, which is a major boon. Matt Ryan, who shot 43.4 percent on threes this season, looks ready for a larger role. So, too, does Rex Pflueger. Gibbs played just 15 minutes per game but showed a lot in his rookie campaign.

Beachem and Vasturia will be missed, but Notre Dame has the goods to keep on ticking despite the departures of two of the programs best players in the last decade. Brey’s club does an excellent job of player development; the Fighting Irish will be back in 2017-18.