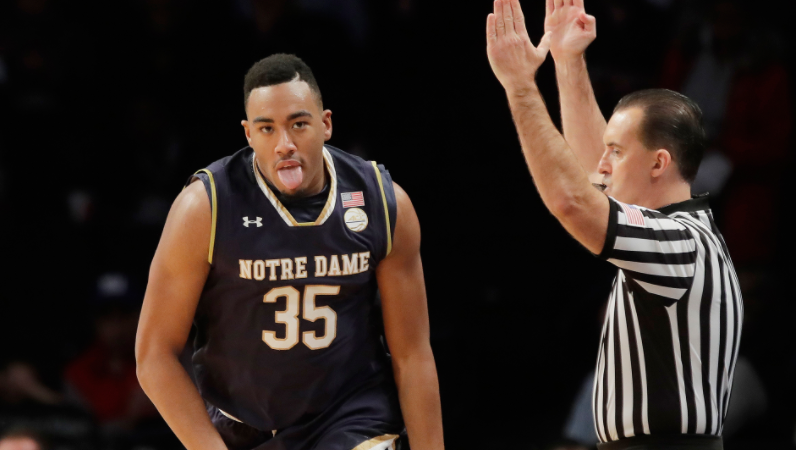 Over the last three seasons, only two ACC teams have ranked inside the top 10 in offensive efficiency each season: Duke and Notre Dame. Fighting Irish coach Mike Brey has created a culture on offense at Notre Dame that values several core tenets of the new pace-and-space era of basketball: three-point shooting, ball rotations, cutters and a refusal to turn the ball over.

Brey’s team runs a derivative of what’s called the “blocker/mover” motion offense. Tony Bennett’s father, Dick, is credited with the origin of the offense while at Wisconsin, and if you’re an NBA junkie like myself, you can catch Damian Lillard, C.J. McCollum and the rest of the Portland Trail Blazers running a quicker, more nuanced version of this on a nightly basis.

Here’s tape of them from two years ago; keep an eye on how these guys flow and glide into their actions. They look like the gears on the side of a watch, spinning in synchronized fashion.

In this clip, V.J. Beachem sets a back pick for Demetrius Jackson while, on the weak side of the floor, Zach Auguste sets a pindown screen for Pat Connaughton, who, by the way, now plays for the Trail Blazers.

This is a basic set of the offense. It allows Notre Dame to get the opposing defense moving side-to-side. When defenders come to help, a quick kickout to a shooter — sometimes with the aid of a flare screen — is almost unstoppable.

The Irish can play multiple actions off of this concept, too. Jackson cuts through following the screen from Beachem, but on another read, Beachem could pop out for a three — if both defenders trail Jackson. Or Jackson could veer back out above the three-point line off of yet another pindown.

The departures of Jackson and Auguste were major blows for the Fighting Irish, but Notre Dame hasn’t missed a beat on offense: 119 points per 100 possessions — No. 8 in the nation, according to KenPom.com. Pass, cut, screen, re-screen, rinse, repeat.

The ball hums around the perimeter in Notre Dame’s offense, which is best suited for multiple playmakers who can dribble, pass, screen and shoot off the catch. Remember: the most dangerous screen-setters, especially away from the ball, are those who can shoot.

That helps explain why Beachem and Vasturia — both in their fourth years in the offense — are so dangerous. Notre Dame runs them off screens and has them set picks, too. These guys possess gravity that contorts defenses and forces them to rotate or switch with pristine timing and communication. If not, they will bury you with a barrage of threes.

Big men who can screen and pass are vital to this offense as well. Former Duke big Mason Plumlee has transformed himself into of on the best passing centers in the NBA as a key cog in Portland’s offense. Notre Dame wants to dot the perimeter with shooters and run five-out (all five players outside of the arc) spread pick-and-roll action, morphing into its patented four-around-one look.

Brey’s team, according to Synergy Sports, scores better than 1.1 points per possession on spot-ups (41.5 percent shooting), which ranks 16th in the nation and No. 4 in the ACC — just behind Syracuse, Duke and Wake Forest. Sophomore Matt Ryan has provided shooting punch off of the bench. He’s shot 45.6 percent on three-pointers. Ryan connects on an even higher clip on “guarded” catch-and-shoot opportunities: 47.1 percent, 1.41 points per possession — No. 7 in the ACC, according to Synergy.

All of this helps create space inside the lane for Colson and Geben. Colson — a favorite of ours at the ACC Analytics page — has been one of the best players in America this season; he ranks ninth overall in KenPom’s Player of the Year standings.

Geben, on the other hand, has been useful in a more limited role. He plays just 16 minutes per game and struggles posting up defenders; according to Synergy, he scores fewer than 0.7 points per possession on post-ups — a paltry figure. But he’s done well as a roller and cutter, which is more valuable in Notre Dame’s spacey offense. Geben hasn’t been used frequently, but he shoots 77.8 percent as a roll man — usually in tandem with point guard Matt Farrell.

It’s critical for Notre Dame’s offense to be efficient in screen usage. Led by Beachem, Notre Dame has excelled coming off screens: 1.12 points per possession on 49.4 percent shooting. This ranks in the 89th percentile nationally. Only Virginia (213), Pittsburgh (135) and North Carolina (127) have scored more total points off of screens this season.

This is an excellent collection of offensive talent; Notre Dame has balance, and the team plays connected, which is why it rates so highly in terms of off-the-ball offense. The Irish score 1.37 points per possession off cuts — the best mark in the ACC. They shoot 69 percent on such possessions and maintain a high efficiency mark by hanging on to the ball — a turnover rate of just 4.2 percent on cuts. That’s the second-lowest mark in the conference.

Every other team in the ACC has struggled away from home, and Wednesday provides yet another road test: No. 10 Florida State. Make sure to tune in; Notre Dame’s offense will once again be on display.