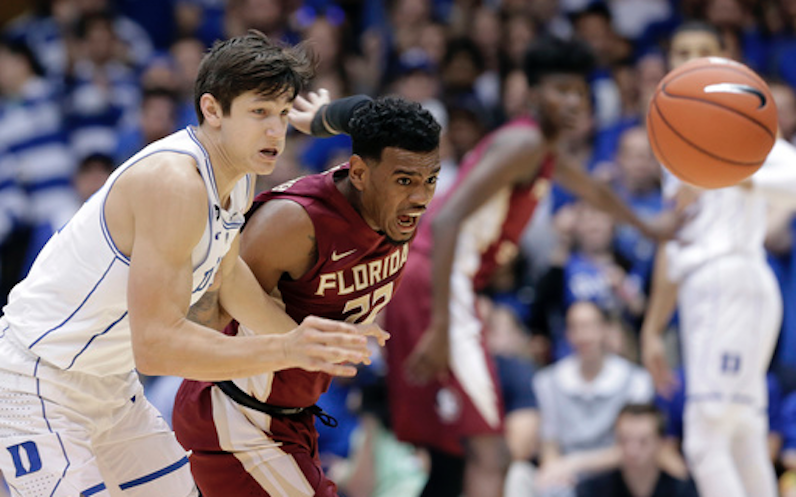 Xavier Rathan-Mayes (22) will be a key in Florida State's Thursday night matchup against FGCU. (AP Photo)

Five ACC NCAA Tournament teams are in action across the first two days of postseason play. Wake Forest will start things off Tuesday night in Dayton.

As each of these five teams heads into its first-round matchup, below are the key stats you need to know for each contest. In Part 1 of this breakdown, we will focus on the five teams playing on Tuesday and Thursday.

The Demon Deacons rallied in the final week of the regular season — with wins over Louisville and Virginia Tech — and claimed the program’s first NCAA tournament berth since 2010. Wake Forest’s resurgence this season was undeniably led by its spacey offense, which surrounded John Collins’ rim runs and post-ups with a barrage of shooters.

Wake Forest, according to KenPom.com, ranks N0. 8 nationally in offensive efficiency and outside the top 150 in terms of points allowed per 100 possessions. The Deacons are here to outscore you. That strategy may just work against Kansas State, too.

Kansas State is 50th in the country, per KenPom, in offensive efficiency, which is pretty good. However, the Wildcats feature two high-usage guards — Barry Brown and Kamau Stokes — who can also shoot the team out of games.

Brown and Stokes, K-State’s starting backcourt, both average double-figures scoring and rank first and second, respectively, on the team in shot attempts per game. But neither is that efficient; Brown shoots just 35.5 percent from the field on a team-leading 10.1 field-goal attempts per game. Both players have offensive ratings under 100, according to KenPom. Kansas State also ranks 269th nationally in pace; Wake, on the other hand, lands inside the top 60 in tempo.

Wake Forest should want this game to turn into a shootout. On offense, watch for side pick-and-rolls and ball reversals to weak-side shooters. Collins, along with Bryant Crawford and Keyshawn Woods, have the goods to push this team to the Round of 64. That is where the real fun begins.

The pick-and-roll partnership of Matt Farrell and Bonzie Colson has been dynamic all season for Mike Brey’s club.

In the ACC Championship Game, Notre Dame seemed to erase most of its circle motion action from the playbook. Instead, the Irish leaned even more heavily on Colson and Farrell’s magic. Spread the court, run pick-and-roll and look for the best shot. It almost worked, too.

With Duke playing Jayson Tatum at the 4, the Blue Devils can switch across almost every screen — something we have heard Mike Krzyzewski and Jeff Capel talk about all season. Those clean catch-and-shoots Steve Vasturia and V.J. Beachem get coming off pin-downs and flare screens are hard to locate when opponents can switch. This could partially explain why the two senior wings went a combined 2-of-11 on three-pointers against Duke.

According to Synergy Sports, Colson — who scored a game-high 29 points — used eight possessions as a roller in pick-and-rolls against Duke. In the semifinals against Florida State, that figure was five.

Keep track of Notre Dame’s offense if this team makes another run to the second weekend of the tournament. When things bog down and the Irish face switch-happy defenses in high-leverage situations, do not be surprised to see them go into a pick-and-roll tunnel with Colson and Farrell.

Strength will meet strength when Virginia tees it up on Friday against CAA champion UNC Wilmington. According the KenPom, the Cavaliers lead the nation in defensive efficiency: 87 points per 100 possessions. Conversely, Wilmington ranks No.18 nationally in offensive efficiency. The Seahawks score 117.8 points per 100 possessions — one of the best figures outside of the top six basketball conferences.

These guys can run — nearly 70 possessions per game, according to KenPom — and score. The Seahawks play a tight rotation and feature four players scoring at least 12 points per game. Wilmington has a wonderful perimeter trio of C.J Bryce, Chris Flemmings and Denzel Ingram; however, a key for Virginia will be finding ways to neutralize the lone interior force: Devontae Cacok.

According to KenPom, Cacok has had one of the most prolific seasons in all of college basketball. The 6-7 sophomore has connected on 80 percent of his two-point field goals — 6.6 attempts per game. That is ridiculous. He ranks No. 1 nationally in both offensive rating (141.9) and true shooting rate (78.9 percent).

Jack Salt, Mamadi Diakite and Jarred Reuter will have their hands full trying to stop Cacok.

Virginia Tech will be an underdog in its first-round matchup against Wisconsin. The Badgers are an experienced bunch and feature one of the nation’s best players: forward Ethan Happ.

But the Hokies, a diverse and potent offensive unit, have something to exploit in Wisconsin’s defense. Buzz Williams should instruct his team of three-point assassins to target and chuck as many long-range bombs as possible.

According to Sports-Reference, Virginia Tech shoots 40.3 percent from beyond the arc, which is good for 13th in the nation. Five different Hokies make at least one three-pointer per game while also shooting better than 35 percent from distance. Virginia Tech gets 33.5 percent of its total points on triples.

Despite ranking No. 8 nationally in defensive efficiency, Wisconsin hasn’t been susceptible to the long ball. The Badgers have allowed opponents to shoot better than 40 percent from beyond the arc in 15 games this season. Wisconsin lost seven of those games, too. On the whole, the Badgers’ foes have connected on 37.7 percent of their three-pointers; that ranks 311th in the nation in opponent three-point percentage.

If Virginia Tech can play at its preferred tempo and sling three-balls, then the Hokies have an excellent shot at springing a first-round upset.

Jonathan Isaac is Florida State’s NBA Draft lottery-bound wunderkind. Dwayne Bacon is the team’s supernova wing and leading scorer. However, a new, refined Xavier Rathan-Mayes is the pilot that drives this spaceship.

XRM will need to bring his usual two-way play to FSU’s opening-round game with Florida Gulf Coast. He needs to run the show on offense, which he has done all season. According to Synergy Sports, Florida State scores 1.28 points per possession and shoots 61.3 percent when Rathan-Mayes is a passer on pick-and-rolls.

Defense, however, will be critical for Rathan-Mayes, too. Dunk City point guard Brandon Goodwin finished top five in scoring in the Atlantic Sun and was named the conference’s Newcomer of the Year. The 6-2 guard shoots 65.8 percent in transition and scores a hyper-efficient 1.35 points per possession. This is good for fourth in the Atlantic Sun.

Florida Gulf Coast wants to run selectively, which means it’s a necessity for the Seminoles to avoid turnovers. FSU loves to crash the offensive glass, too, but that could also leave the Seminoles vulnerable for run-outs and cross-matches in transition. The Eagles could hurt them here.