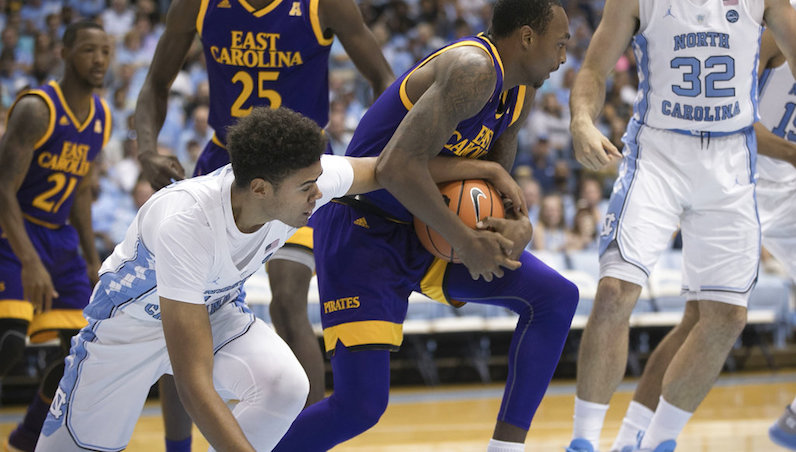 When you are a kid, it always seems like the more you have of something, the better. More candy, more scoops of ice cream, more time for recess. Less is always, well, less. That same sort of mentality can apply to basketball, too: more touches, more shots, more points. Yay! Right?

Well, that may not always be the case, though.

Cameron Johnson is on the verge of starting his first season in a North Carolina jersey; big expectations come with his arrival. UNC is still living off the high of the 2017 national championship, but in Chapel Hill, the more banners, the better. You know how that saying goes.

The Tar Heels must replace several key players from a season ago, including high-usage wing Justin Jackson, and a trio of frontcourt stalwarts. UNC should look to play smaller and shoot more three-pointers; that’s what the team’s personnel is best suited for — whether it happens or not.

No matter the style of play, North Carolina will ask Cameron Johnson to carry its offense at times — uncharted territory for the redshirt junior.

At Pitt, Cameron Johnson was one of the ACC’s most efficient offensive players last season. Johnson ranked No. 106 in Division I basketball in terms of offensive rating: 120.7 points per 100 possessions, per KenPom. He accomplished this mostly by spotting up while Michael Young and Jamel Artis went to work in the paint.

According to Synergy Sports, Johnson shot 40 percent and scored 1.11 points per possession (an effective field goal rate of 57.1 percent) on spot-ups last season. He ranked 18th in the ACC in terms of offensive efficiency of spot-up possessions (minimum of 100 possessions). Johnson scored 168 points on spot-ups, per Synergy, which accounts for 43 percent of the 392 total points he scored last season.

Johnson’s role was to shoot jumpers in the halfcourt and shoot jumpers in transition (1.3 points per possession). He averaged 2.3 assists per game; so Johnson wasn’t a blackhole. However, he was asked to do little outside of the always-important task of making shots.

A Man on an island of efficiency

Cameron Johnson was the only player in the ACC last season to record a usage rate under 17 percent and average at least 11 points per game. Dating back to the 2009-10 season, that’s happened only four other times in the ACC, per Sports Reference.

The common thread with these players: they are all catch-and-shoot three-point threats. That’s an incredibly valuable skill to have — and one that UNC will surely take advantage of plenty this season.

Things will likely be different for Johnson at UNC this season, though, especially in the short-term without Joel Berry. For the first time in his career, Johnson will have to be comfortable as the one creating offense out of nothing.

Last season at Pitt, the Panthers ranked 298th in the nation in pace, per KenPom; the year before, when Johnson was a rotation player, Pitt clocked in a No. 303 in pace. That’s about to change now, quickly.

In his 14 seasons at UNC, Roy Williams has finished inside the top 25 nationally in terms of pace on 12 different occasions. For an offensive-minded player like Johnson, this should be a welcomed adjustment. More possessions, more opportunities to find a rhythm and score.

Cameron Johnson has the skills and look a player ready for a larger role; it helps that he’s already logged over 1,500 career minutes, include some high-leverage action in the ACC.

Increased utility likely means the sacrifice of some efficiency. His counting stats should jump — more possessions, higher usage — but don’t be surprised if some shooting numbers dip. In the team’s exhibition win over Barton College, Johnson launched a team-high 12 field goal attempts, making four. He also attempted a team-high six three-pointers, making only one.

That’s a tradeoff that Johnson and UNC should both be happy to live with, but it’s worth monitoring in 2017-18.

Who will be the fifth starter for UNC basketball?