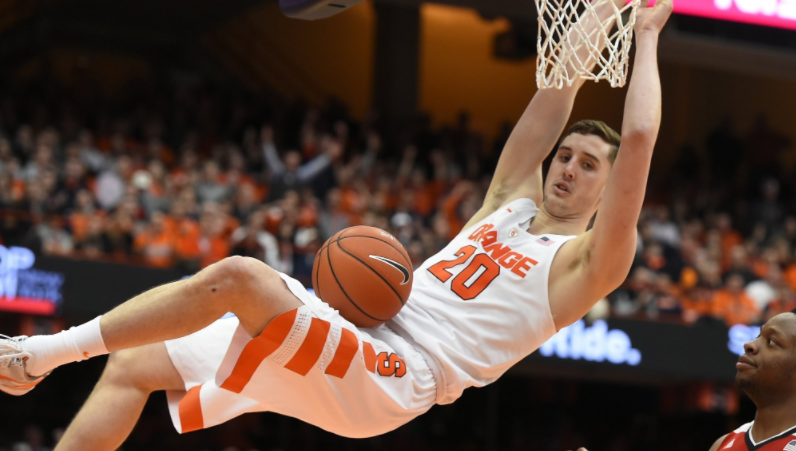 Syracuse's Tyler Lydon has the two-way talent to be a first round NBA draft pick. (AP Photo)

Tyler Lydon could have jumped into the NBA Draft waters after Syracuse’s darling run to the 2016 Final Four. He decided not to, however, and returned for his sophomore season.

Lydon, along with Nebraska transfer and perimeter marksman Andrew White, would form the backbone of a stout Syracuse offense. Or at least that was the thought.

The Orange stumbled out of the gate; Syracuse won just six of its first 10 games, with the only “notable” win coming against Monmouth. Lydon couldn’t quite find his footing. In the first nine games, with a bigger pile of responsibilities on his plate, the sophomore averaged just 9.9 points while shooting 39.2 percent from the field (34.3 percent on three-pointers).

Since then, though, my word have things changed. In the last 15 games, Lydon has perked up: 16.3 points, 8.1 rebounds, 2.1 assists, 1.7 blocks per game. In that stretch, he has connected on 54.8 percent of his attempts from the floor, while flinging in threes at a ridiculous 50 percent rate (on nearly four attempts per game).

Lydon’s draft stock never took a nosedive over what has been an up-and-down season for Syracuse (mostly up recently, though). This is what happens when you possess a skill set that literally every team in the NBA — all 30 of them — covet.

Lydon is a far cry from Kristaps Porzingis of the New York Knicks, but he’s the rare breed of player who can combine three-point shooting with rim-protection defense. There are but only so many of those players on Earth. This is simple supply and demand.

Lydon’s shot-blocking numbers have dipped slightly from last season, but they are still darn good. According to Sports-Reference, Lydon has rejected 5.1 percent of the two-point field goals he’s seen while on the court, which ranks sixth in the ACC.

The 6-9 forward spends a lot of time playing in the middle of Syracuse’s zone as the team’s de facto center. That won’t mean much for his NBA career, but he has done a decent job closing off the paint. The Orange aren’t a very good defensive team — giving up 101.7 points per 100 possessions, according to KenPom.com — but Lydon has held opponents to just 32.8 percent shooting on spot-up possessions, per Synergy Sports. That mark is better than Isaiah Hicks and Justin Jackson, two other long-limbed defenders.

If you isolate specifically for jump shots, opponents have made just 30.5 percent of their attempts when Lydon has been the defender, according to Synergy. This ranks inside the top 30 in the ACC among players who have defended at least 50 jumpers.

Posting up against Syracuse’s patented 2-3 zone isn’t a realistic option, so Lydon doesn’t have a ton of reps defending in the paint one-on-one. According to Synergy, however, opponents have shot just 25 percent on field goals defended by Lydon via post-ups.

If Lydon jumps to the NBA, he will have to be ready to chase shooters around the arc and hold his ground on post-ups when teams try to take control of a perceived matchup advantage. His shooting prowess can be fully leveraged if he’s able to unlock.

Two prominent NBA mock draft platforms — DraftExpress and NBADraft.net — both have Lydon located inside their top 25. DraftExpress rates him as the No. 19 prospect; NBADraft.net has him slotted at No. 23. There are few better jobs to land right out of college than first-round draft pick status in the NBA: two years of guaranteed money plus two additional team options after that. Of note, too: The rookie pay scale is about to jump up this offseason. The financial benefit of being a top-25 pick has never been better since the NBA started slotting draft salaries.

Syracuse has had at least one player drafted in the first round of each NBA Draft since 2012; it’s common knowledge that this program is one of best pro basketball factories in America. If the Orange are to have another Round 1 selection this June, Lydon is the best bet.