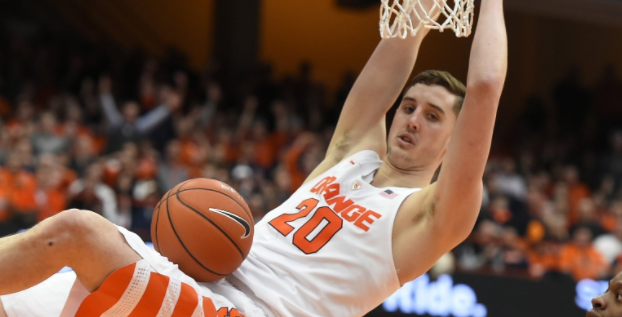 Tyler Lydon put together one of the better freshman campaigns in the ACC in 2015-16. He looked to be the rare player in college who can guard all three frontcourt positions, splash threes, rebound and protect the rim.

His rookie year crescendoed over the final 13 games when he scored 12.4 points per game on better than 51 percent shooting, while rejecting two shots per game. That — along with Syracuse’s Cinderella-like jaunt to the Final Four — propelled his name up NBA Draft boards.

Lydon, however, decided to return to upstate New York for a sophomore season that came with serious expectations. The 6-9 Lydon was voted preseason first-team All-ACC, and even garnered some preseason All-American votes. It’s incredibly early in the season, and the forward is having to adjust to a new starter at point guard with Michael Gbinije no longer running the show. But Lydon has gotten off to a chilly start against a mostly cupcake schedule.

He’s connected on 34.3 percent of his threes, which isn’t too bad but is down from his 40.5 percent clip of a season ago. Lydon is also shooting just 39.2 percent from the field, including a frigid 43.6 percent mark from inside the arc — an almost 11 percent dip from his freshman year. This has reflected itself in his true shooting rate: 51.8 percent, down from a tasty 60.5 percent last season.

This doesn’t appear to be the byproduct of an expanded rotation, either. Lydon is getting playing time and touches. He’s seeing the floor more (31.2 minutes), using a larger chunk of possessions (18.3 percent usage rate) and shooting with great volume (8.2 attempts per game). Despite the increased utility, most of Lydon’s per-40-minute numbers have fallen, and he’s scored in double figures just four times this season. He’s also turning the ball over more frequently (15.7 percent turnover rate), and he’s blocking fewer shots — block rate down to 4.1 percent, per Sports-Reference.

It’s not all bad, though: Lydon’s game has become a little more well-rounded in other areas. His rebounding and assist numbers have tracked up, and while he’s shooting more free throws per game (2.8), his free-throw attempt rate has dropped (33.8 percent).

Syracuse has played just three teams ranked inside Ken Pomeroy’s top 80; Lydon was great in the South Carolina game but has been somewhat up-and-down in these contests. Against the Gamecocks, Wisconsin and UConn, Lydon averaged 11.3 points and seven rebounds while shooting just 35.7 percent from the field and 33.3 percent on three-pointers. The Orange (6-3) — who checked in at No. 9 in our weekly power rankings — lost all three of these games.

Syracuse has lost three of its last five games and has a date on the horizon with rival Georgetown (6-4) this Saturday at the Carrier Dome. This would be the perfect opportunity for Lydon to shake off the early-season rust and get cooking. There’s no questioning Lydon’s skills; he’s a very good player, and it’s only a matter of time before we start seeing that talent manifest itself on the court. Until then, though, it’ll be up to Andrew White III to prop up the offense.