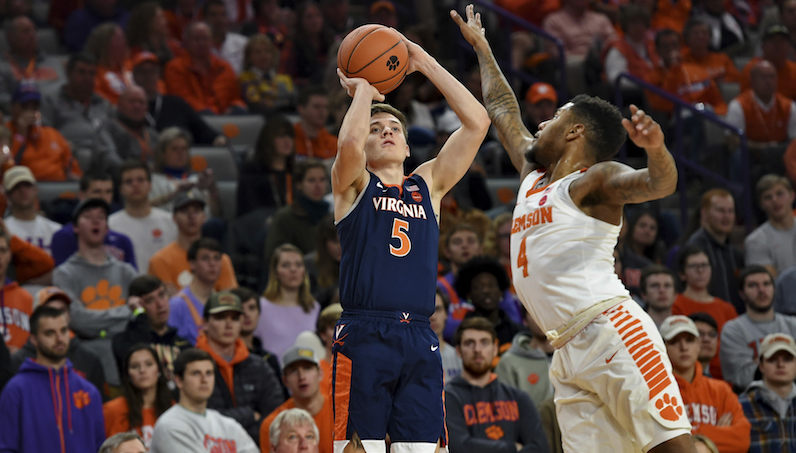 In this week’s Benchwarmer Notes, we take a look at the rapid release of Virginia’s Kyle Guy, the impact of Tre Jones on Duke’s defense and why, personally, it’s so fun to watch Dwayne Sutton hoop for Louisville.

Kyle Guy: King of the Catch-and-Shoot

Very few talk of the improvement of Kyle Guy because it’s nuanced: he makes reads better than he used to, he’s more patient off the bounce, and he boxes out. The shot has always been there but these skills are new.

Inside of Virginia’s mover-blocker offense, Guy is an almost perfect option for when this team goes to its “sides” look. He’s so skilled at creating separation of pindown and flare screens — reading his defender and making himself available for the pass.

According to Synergy Sports, Guy has scored 1.18 points per possession (61.7 eFG%) coming off screens this season. He’s so explosive going from rocketing off the screen to getting to his shot.

On catch-and-shoot attempts, Guy has scored 1.3 points per possession (63.7 eFG%), which is absolute sizzling and a top-20 number amongst players with at least 75 possessions. Watch how hard he works on this possession. This is absolutely maddening to defend.

A lot of these looks have Guy flaring or curling to the corners; it’s no surprise that he’s the ACC’s top gunner on corner threes.

It is time for that sweet sweet #PreWeekedPlot action!

With some data from conf games, here’s how the ACC’s top scorers by zone look

Lots of useful info on where players score:

On Thursday afternoon, Duke basketball get some really great news: Tre Jones will return sooner rather that later, according to Coach K. The shoulder injury he suffered in the overtime loss to Syracuse won’t cost him the season.

The eventual return of Jones is crucial for Duke in, like, 500 difference ways, including with his ability to lockdown on the ball and turn defense directly into offense.

Before he left against Syracuse, Jones had four steals in only six minutes of action. He ranks 69th nationally in steal rate — 3.7 percent — according to KenPom. He’s averaging a ridiculous 2.8 steals per 40 minutes, too.

The Blue Devils won’t have him for the Virginia game; it will be interesting to see how Duke defends on Saturday and what happens when Jones returns.

Cool to see: The rise of Dwayne Sutton

Almost three years ago I lost a job. It was a job that I worked six days per week for very little money. It was brutal to lose the job (on my off day, no less); however, for the first time in two years, I’d have a free weekend. I decided to take a trip up from Raleigh to Asheville.

The plan was to go on a few hikes, eat a bunch of carbs, drink a few beverages from some of Asheville’s fine breweries and watch the Saturday night tilt between Golden State and Oklahoma City (the one when Steph Curry hit the game-winner from a mile away). Those plans were altered, however, when I realized — much to my joy — that UNC Asheville had a home basketball game that day; the Bulldogs were hosting Cliff Ellis and Coastal Carolina.

I decided to head over to Kimmel Arena — a small, gorgeous college hoops venue — and bought a cheap ticket. In that game, I was blown away watching a freshman for Asheville — his name was Dwayne Sutton.

Asheville fell that day, but Sutton scored 24 points (10-13 FGA), grabbed eight rebounds and handed out three assists. He also helped trigger a 50-point second half that featured a pressure-inducing full-court press. I was sold on him as a player.

Friday Facts:
🏀 @JordanNwora is the 2nd-most improved scorer in the nation (+12.4 ppg)

Back to 2019: Sutton is a starter for a Louisville team that has wins over Michigan State and Louisville, and ranks No. 22 in KenPom. A year after coming off the bench as an occasional small-ball lineup option, Sutton is playing 31.2 minutes per game, while averaging 10.2 points (58.3 TS%) and 6.8 rebounds (8.5 percent offensive rebound rate).

Dwayne Sutton is on pace to finish his career as one of the top 3 scorers among transfers to Louisville. pic.twitter.com/KZWN3wM9N4

It is so neat to see this guy go from playing in front of a couple hundred fans three years ago to turning into a serious rotation piece for one of the ACC’s top teams. That is all. Thank you for indulging me.

FSU and Pittsburgh team up for a random, wacky game

Let’s go back to Monday when Pittsburgh hosted and upset No. 11 Florida State. There are a few random numbers to highlight.

In that performance, Florida State went just 2-of-22 on 3-point attempts (9.1 3P%). This was just the 15th game this season, according to Sports Reference, that a team has attempted 20+ 3-pointers and made two or fewer of those attempts.

On the flip side, Pitt’s dynamic quartet of newcomers continued to get to the foul line, at will. Led by Trey McGowens (18-19 FTA), Pitt attempted 46 free throws — to 46 total field goal attempts, a free throw attempt rate of 100 percent.

According to KenPom: McGowens, Xavier Johnson, Au’Diese Toney and Malik Ellison are all currently drawing over 4.5 fouls per 40 minutes. One step further: all four of those guys are averaging over 5.5 free throw attempts per 40 minutes.

Film Room: Another look at the offensive profile of Louisville’s Jordan Nwora