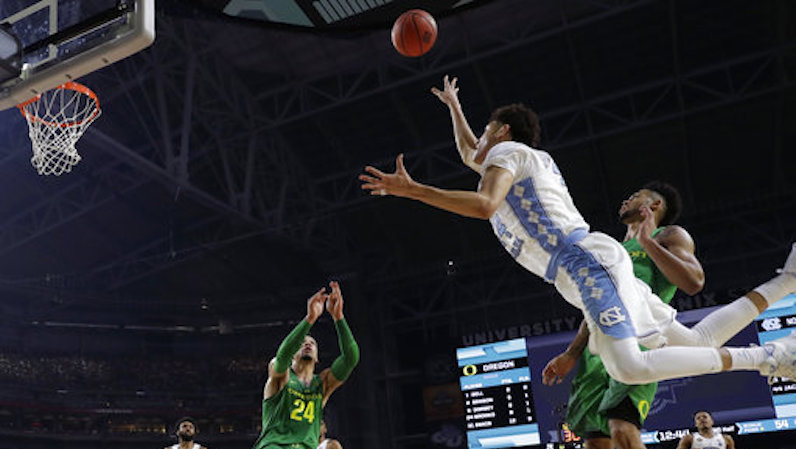 North Carolina forward Justin Jackson, center, drives to the basket over Oregon's Dillon Brooks (24) and Tyler Dorsey, right, during the second half in the semifinals of the Final Four NCAA college basketball tournament. (AP Photo)

In the latest mock draft by DraftExpress, there are only two upperclassmen projected for the first round. One of those two players is North Carolina junior Justin Jackson, who is prepared for the proverbial next step — in more ways than one.

Jackson is as NBA-ready of a prospect as you will find in 2017. Assuming he declares for the draft, here are some reasons why whichever team selects UNC’s star swingman will be happy.

Not only is Jackson one of only two upperclassmen in the top 30 of this mock; he is also the only junior or senior projected as a lottery pick (first 14 selections). Yes, obviously guys like Lonzo Ball and Markelle Fultz are prodigies — savants put on Earth to get buckets. They will be the top two selections, in some order, and project as future All-Stars.

The majority of first-round selections will be one-and-done players, like Ball, Fultz and Duke’s Jayson Tatum. That is the nature of the business. This year’s draft is projected by many to feature a historically great class of players. However, some of those guys likely will not be ready to contribute from Day 1. Jackson will be an exception to that, though.

Justin Jackson spent the last three years playing ball in a Tobacco Road-based basketball laboratory. It is hard to think of a better place for a player to develop and learn the game — specifically on the college circuit. In his time at Chapel Hill, Jackson played in 118 games and spent over 3,400 minutes on the floor.

Think about this: Jaron Blossomgame, a likely second-round pick, played at Clemson for four seasons (not including a redshirt year). However, despite spending more time there, Blossomgame played in just 10 more games than Jackson. Semi Ojeleye — the Duke transfer and 2017 AAC Player of the Year — is the only other upperclassman projected by DraftExpress as a first-rounder. Ojeleye, compared to Jackson, played in just 58 games, though. Jackson entered college ball a year after Ojeleye, but he played 2,000 more minutes than the SMU standout.

The national champion, whenever he declares, will enter the professional ranks with a plethora of high-level, in-game experience. That is invaluable.

After two strong seasons at UNC, Jackson took off in 2016-17. His evolution into the ACC’s best player has been well-documented, but it is the single biggest reason why the Tar Heels won this year’s title. Go over all the redemption narratives you want; what made the difference for this team was Jackson’s development, especially after Brice Johnson left town. This team needed a star.

It cannot be stated enough: Jackson improved in quantifiable ways that will serve him well in the NBA immediately. Jackson can shoot off the catch, create in pick-and-roll action and defend multiple positions. All three of these traits are incredibly useful in the league.

Every NBA team has used at least 974 possessions via a ball-handler in pick-and-rolls this season. As the league moved away from iso-ball to a more European slash-and-kick style of play after the mid-2000s rules changes, a heavy emphasis has been placed on pick-and-roll basketball. Teams have to know how to run and defend this action. Jackson is adept here.

Everyone knows that Jackson greatly improved his perimeter shooting this season, although you should avert your eyes from the box score against Gonzaga. However, what is discussed less is how Jackson was able to make that giant leap. Of course he practiced a lot last summer and worked hard on his craft. But when game play started, he knew when and how he wanted the ball.

Jackson worked breathlessly off of the ball to free himself for catch-and-shoot bombs. He rans to the wings in North Carolina’s patented secondary break and looked to score before the defense was set. According to Synergy, Jackson scored 1.21 points per possession in transition this season — a terrific number. Occasionally, UNC would deploy him as a nasty on-ball screener for Joel Berry; the Heels burned NC State with this type of 1-3 pick-and-roll action in the win in Chapel Hill.

All of that is good, but Jackson also developed a knack for getting clean looks coming off of screens (mostly pindowns). Like a lot of right-handed players, Jackson preferred coming off screens to his right, which helps the shooter square his shoulders to the basket. Per Synergy, Jackson connected on 41.5 percent of his attempts when coming off a screen set to his right (75 possessions). Only seven players in the ACC performed this type of action for at least 30 possessions in 2016-17. Of those seven, only Duke’s Luke Kennard was more efficient.

Jackson really started to command respect on the defensive end of the floor this season, too. In North Carolina’s final three games of the NCAA Tournament, the junior played a major role in making Malik Monk, Tyler Dorsey (hotter than anyone in America entering the game) and Jordan Mathews rather uncomfortable. He even switched on to Nigel Williams-Goss for possessions in the championship game.

Jackson’s defense against Monk was especially telling. Monk was one of the best pure scorers in all of college basketball, and except for the two bombs he hit in the final minute of play, Jackson mostly neutralized him. These are the types of players Jackson will check on the next level — shooters who run off an endless supply of screens and can also put the ball on the deck. Jackson is up to that task.