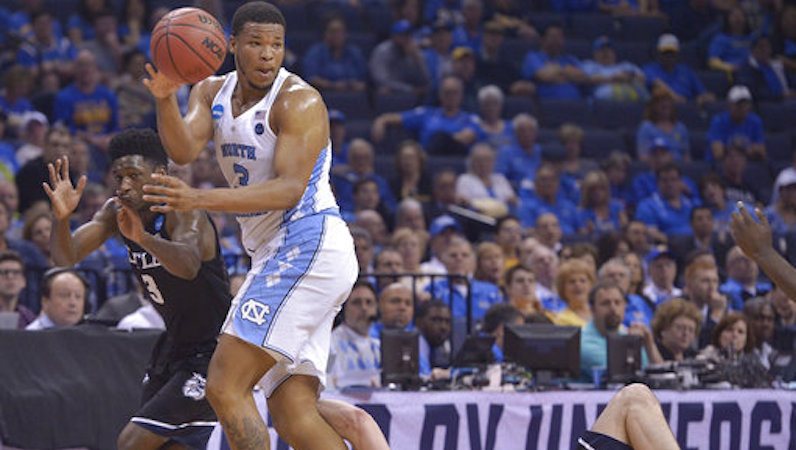 The Final Four gets underway Saturday in Phoenix. In the second of two games, North Carolina will face off with Oregon. This is the 20th Final Four in the history of North Carolina basketball; for Oregon, however, this will be the program’s first Final Four appearance since the initial NCAA Tournament way back in 1939.

Here are four reasons why North Carolina will advance past Oregon in the national semifinal.

Oregon will be without its unicorn

In its Pac-12 Tournament win over California, Oregon lost stud big man Chris Boucher for the season when he tore his ACL. Boucher is one of the rare players who can both shoot three-pointers and protect the rim — a unicorn, of sorts. The 6-10 senior connected on 35 percent of his threes (3.3 attempts per game) and ranked No. 8 nationally in block rate. According to KenPom, Boucher blocked 11.8 percent of two-point field-goal attempts while on the court. That is an incredible skill set.

Jordan Bell, however, can cover some of this ground. Bell turned into Spider-Man in the Elite Eight win over Kansas, blocking eight shots. Beyond Bell, though, the Ducks have little in the way of frontcourt depth. UNC should attack the hoop relentlessly. The Tar Heels could put Oregon in a very uncomfortable situation if Bell gets into foul trouble.

Kennedy Meeks was a destructive force on the glass in North Carolina’s nail-biting win over Kentucky. The senior ripped down a career-best 17 rebounds; according to Sports-Reference, Meeks grabbed 30 percent of all available rebounds while on the court.

Boucher is an extraordinary rebounder; he ranks inside the top 300 nationally in both offensive and defensive rebounding rate, per KenPom. Oregon has out-rebounded its opponents in all but one game since Boucher exited the lineup. However, in the one game the Ducks have lost since Boucher’s injury — a defeat at the hands of Arizona in the Pac-12 Tournament championship game — Oregon was beaten on the glass.

North Carolina is the best rebounding team in the nation. The Tar Heels are at their best when Justin Jackson splashes threes and the big guys play volleyball and dominate at the rim.

Dillon Brooks, the 2017 Pac-12 Player of the Year, is an exceptional talent; Oregon has been a different team since he returned to the roation following an early-season injury. However, he serves as the team’s nominal 4; he is not a very good rebounder. This makes the matchup with Isaiah Hicks one to circle.

Hicks has struggled in recent games, and he could face challenges having to guard Brooks 25 feet from the hoop. But if Hicks can win the edge on the glass, UNC should be primed to capitalize.

UNC did not have its best offensive game against Kentucky, but the Tar Heels brought the necessary effort on the defensive end to grab the win.

Justin Jackson deserves a gold star for his effort on Malik Monk. Monk is one of the nation’s best catch-and-shoot bombers; he also torched North Carolina for 47 points last December. Jackson, however, was in his hip pocket for most of the afternoon. Monk finished with just 12 points on 4-of-10 shooting. Six of those points, though, came in the final 40 seconds of the game.

Oregon has an arsenal of perimeter options who can poison the well for an opponent, including Tyler Dorsey. There is not a hotter player in America right now than this dude, who has averaged 23.6 points per game on 62.4 percent shooting (57.8 percent on three-pointers) over Oregon’s last six games. Jackson, Theo Pinson and Joel Berry will have their hands full checking the Ducks.

However, North Carolina has a great chance at victory Saturday night if it can defend like it did against Arkansas and Kentucky.

Stay one step ahead

Oregon spends a lot of time in man-to-man defense, but Dana Altman’s club will mix it up some, too. The Ducks will drop into a 1-3-1 zone and also press opponents. Oregon uses this to change tempo — speed up or slow down an opponent. It works.

According to KenPom, Oregon ranks No. 19 nationally in defensive efficiency. The Ducks held the powerful Kansas Jayhawks to less than one point per possession in their Elite Eight victory.

The Tar Heels will be ready for these in-game adjustments, but countering is always easier in theory than in practice. This is a well-coached team, led by a Hall of Famer, and UNC has the personnel to score against any scheme. Plus, if Jackson and Berry get hot, it will not matter what defense Oregon trots out.

North Carolina will be the third-best offense Oregon has seen this season — behind UCLA and Michigan. In two games against UCLA, Oregon allowed better than 1.2 points per possession, per KenPom. UNC will be tough to beat if it can reach that level of offensive efficiency.