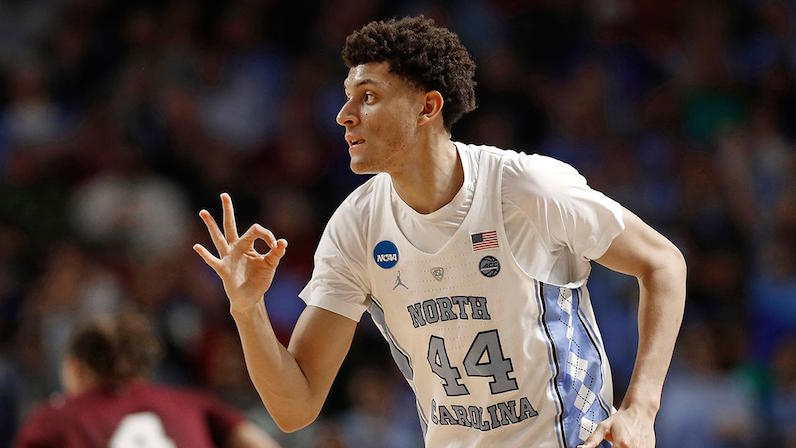 It is fair to say that New York City was none too kind to Justin Jackson. North Carolina’s star swingman struggled from the field in two ACC Tournament games. Jackson shot just 33 percent from the floor and went 5-of-18 (27.8 percent) from beyond the arc. After a season of dominance, when Jackson earned ACC Player of the Year, this slip was worrisome.

However, Jackson put concerns to bed in the opening weekend of the NCAA Tournament. This team needs his scoring punch to be a national championship contender, and while the victory over Arkansas was shaky, Jackson regrouped and made plays down the stretch for UNC. As the team heads west for Memphis and a date with Butler, signs of encouragement were present this past weekend for Jackson.

Part of what allowed Jackson to shoot a career-best 38.6 percent on three-pointers — nearly 10 percentage points above his sophomore output — was his excellence on catch-and-shots. We have talked about his newfound proficiency in this space before, but according to Synergy Sports, Jackson has been one of just 28 players in the ACC to record at least 100 catch-and-shoot possessions in 2016-17.

Jackson has shot 38.3 percent on such possessions and joined Syracuse’s Andrew White as the only two players in the conference to record over 200 points off of catch-and-shoots this season. North Carolina’s star has scored 214 on catch-and-shoots, to be exact. That is ripping a lot of nets.

In the opening-round victory over Texas Southern, Jackson splashed five three-balls on eight attempts. He used a total of two combined dribbles before connecting on those five three-pointers.

UNC needs Jackson to hunt for his shot in transition, too, which he has had no problem with this season. Jackson has scored 1.2 points per possession in transition (58.8 percent shooting), per Synergy. That number, however, balloons even higher when the attempts come from the right wing — one of Jackson’s moneyball areas on the floor.

According to Synergy, Jackson has scored 1.4 points per possession on 64 percent shooting from the right wing. This ranks No. 2 in the ACC among players with 30-plus possessions — behind only Virginia Tech’s Ahmed Hill. Jackson has been terrific all season long; he has proven himself to be a trusted scorer, and there was no real need to overreact following some subpar performances at Barclays Center.

No, we are not talking Huxley here. This is about Justin Jackson having a variety of off-the-ball moves to counter whatever opposing defenders throw at him. From here on out, every scouting report with UNC will start with: How do we stop Justin Jackson?

The bread and butter for North Carolina on offense, as long as Roy Williams is there, will be its secondary break. However, once the Tar Heels have to settle into half-court sets, Jackson’s off-ball movements control the flow.

The junior is darn good at not just reading where his screen is coming from, but also setting up his defender. When Texas Southern defenders cheated over the top of pindowns, Jackson flared and used the space to drive to the hoop after a catch.

In the crazed, come-from-behind victory against Arkansas, Jackson was in high demand down the stretch. While he did not have his best performance from the field, he connected on several jumpers that helped keep UNC afloat, including a three-pointer that tied the game at 58.

The road to Phoenix

If UNC is going to make a return trip to the Final Four, Jackson will need to continue raining fire against Butler and the winner of Kentucky-UCLA. North Carolina ranks No. 6 nationally in offensive efficiency, per KenPom, which should make for a fun juxtaposition with the Bulldogs.

Butler ranks inside the top 50 in points allowed per possession: 0.97. It has been over a month since the Bulldogs allowed an opponent to score over 80 points in a game — a 110-86 road win over St. Johns. Butler’s loss to Seton Hall in its regular-season finale is the last time an opponent scored better than one point per possession against the Bulldogs, according to Sports-Reference.

UNC could be due for a bounceback performance following the Arkansas game. For that to happen, Jackson will have to heat up.