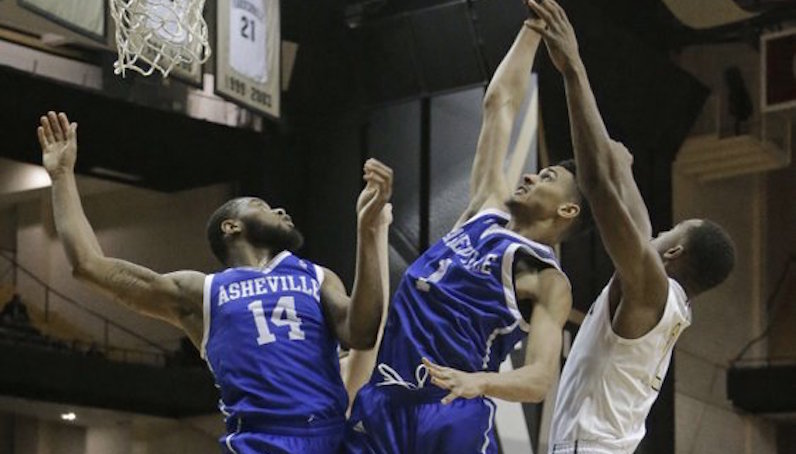 Jonathan Baehre (1) goes up for a rebound against Vanderbilt in November 2017. (AP Photo)

Here’s a look at what Baehre can add to Clemson’s program.

Inside out: Some of both

Baehre gets a good portion of his work done offensively around the hoop; that’s evidenced by 64.3 percent clip on two-point field goal attempts, which ranks No. 66 in the nation.

According to Synergy Sports, 47 percent of Baehre’s field goal attempts in the half-court this season were non-post-up attempts. Baehre connect on 69.1 percent of these shots and scored 1.4 points per possession — a top-100 number amongst players with at least 75 possessions.

On catch-and-shoot jump shot attempts this season, Baehre went 27-of-70 (38.6 FG%) with an effective shooting rate of 54.3 percent, per Synergy.

The upcoming redshirt season for Jonathan Baehre could rather beneficial for the German national, too. According to UNC Asheville’s website, Baehre weighs 200 pounds. So before having to bang in post against ACC competition, Baehre could theoretically add some muscle.

Regardless of his weight, Baehre already profiles as an interesting defensive prospect. Baehre blocked 9.3 percent of opponent two-point field goal attempts while on the floor last season, which ranked 37th nationally, per KenPom.

Down the road in Death Valley

Elijah Thomas — one of the ACC’s top post scorers and shot blockers — will return to Clemson for the 2018-19 season, instead of heading pro; this, however, will be his final season of eligibility.

3-star recruit Trey Jamison, a 6-foot-11 center, will enter the program next season. Rising sophomore Aamir Simms came on strong to the end of this past season: 5.8 points, 4.1 rebounds, 50 FG% over the final 11 games, with nine starts. It looks like Baehre can be expected to join that mix upfront for the Tigers.

The next great Clemson wide receiver