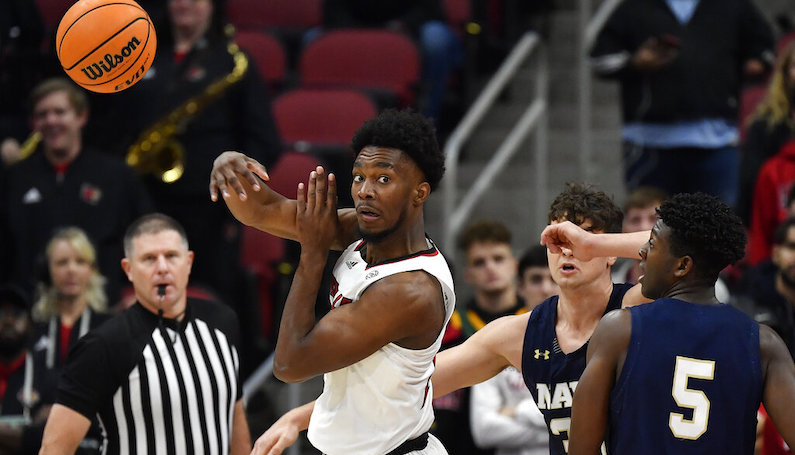 Jae’Lyn Withers is off to a strong start in his redshirt sophomore season for Louisville. Let’s take quick look at Withers: What’s new this season? How’s the fit next to veteran center Malik Williams?

Refusing To Wither Away

The 2021-22 season started in uneasy fashion for the Cardinals; however, a 17-point win over Navy serves as a bit of an early-season palate cleanser. Matt Cross hit four 3-pointers, including a couple no-hesitation rips from well beyond the arc, and finished with a game-high 14 points vs. Navy. Cross may have the quickest 3-point release in the ACC this season.

Three other Louisville players scored in double figures, too, including Jae’Lyn Withers: 11 points (4-of-4 FGA) and three steals.

Withers was excellent last season as a small-ball center; he worked well with Carlik Jones and David Johnson. With Louisville resetting at the guard positions, and Malik Williams back, Withers must take on more of a hybrid frontcourt role, though: playing in space, looking for his own shot and knocking down 3-pointers.

It’s only three games, but Withers has upped his 3-point attempt rate from last season. Nearly 48 percent of his field goal attempts this season have come from beyond the arc: 4-of-10 from deep (40 3P%).

There are reasons to be bullish on Withers, as a player, and his jump shot. He’s a career 69 percent free throw shooter, which is a mostly good indicator. Plus, he’s flashed some shot versatility, too. Mix this with his willingness to shoot from deep and there should be optimism for Withers as a projectable shooter.

Early on last season, it was clear that Withers had the ability to handle the ball in space, but this type of activity is another story: off-dribble pull-up 2-pointers in traffic.

The early-offense pitch for Withers as a trail man is a part of Louisville’s offensive package this season. When he gets the ball in this scenario, Withers can look for a quick catch-and-shoot or drive downhill.

This is an NBA-type action: a spread-floor quick-hitter to a play-making forward. (I refer to this action as Pitch Toronto due to how frequently the Raptors used to run it for Pascal Siakam). Several ACC teams will utilize this same concept for their own tall playmakers, including Florida State with RaiQuan Gray last season.

During the 2020-21 season, Duke used this pitch action for Jalen Johnson, Wendell Moore Jr. and Matthew Hurt. (The Blue Devils have used this a couple times this season with Paolo Banchero, too.)

The ways in which Withers is able to build and increase half-court advantages will be critical for Louisville this season. The Cardinals greatly improved their perimeter shooting in the offseason, but Louisville also play more this season with two traditional frontcourt players on the floor.

According to Pivot Analysis, Withers has shared the floor with Malik Williams for 44 of his 72 minutes of action, so far this season. Louisville is -6 over those 44 minutes with an offensive rating of only 84.8 points per 100 possessions. It’s too early and too small of a sample to overreact, but that type of efficiency won’t cut it.

This means putting a lot on his plate, but Withers is one of the few on this roster that can draw a double team or force defenses to bend when he drives and attacks the paint. What he does with those opportunities may ultimately determine Louisville’s offensive ceiling.

For instance: this possession vs. Navy allows Withers to showcase his well-rounded skill set. The Cards run a Horns Out set, with Withers coming off a brush screen from Williams to receive a pass form Jarrod West. Withers swings it to Williams and then has an option: come off the slice screen from West or a pindown from Williams. Withers elects to curl the pindown and draws two defenders in the paint, thus creating the spot-up look for Williams, who builds off the advantage by driving and kick to West for a 3.

More of Withers and Williams from the Navy game: Louisville runs 4-around-1 pick-and-roll with West and Williams, with Navy playing to the level of the ball screen.

West quickly feeds a pocket pass to Williams, who is initially open on the roll, with no tag from the weak-side slot defender. John Carter, who is guarding Withers in the weak-side corner, slides over to take away a layup for Williams. Withers sees this and crashes in off a corner cut. Instead of running Carter over, Williams picks up his dribble and makes a savvy short-roll pass to the cutting Withers.

If the Cardinals continue to dial up the Withers-Williams frontcourt pairing, one of the other things that will matter a great deal with be Louisville’s short-roll game out of spread pick-and-roll action. The roll man will need to make good, quick decisions, while the secondary targets must be ready to move and attack when called upon.

Is Wendell Moore Jr. making The Leap for Duke Basketball?