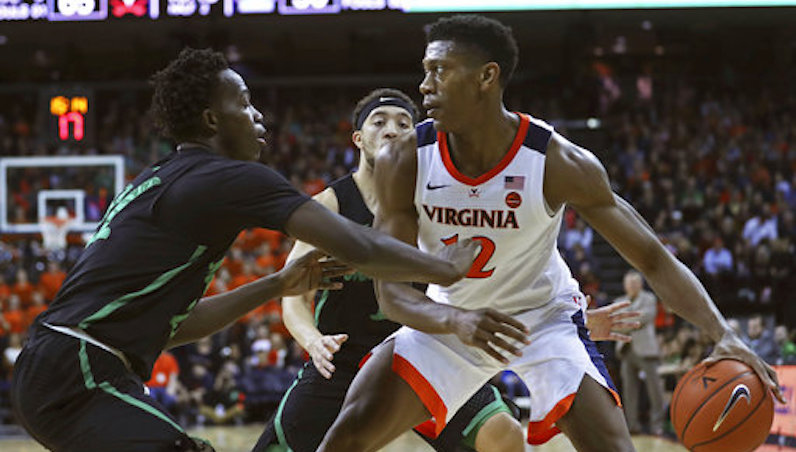 Zack Wajsgras/AP Virginia's guard De'Andre Hunter (12) tries to drive past two Marshall defenders in the second half at John Paul Jones Arena on Monday. Virginia scored into the triple digits with a last second basket to beat Marshall 100-64.

This is a very good Virginia basketball team. The Wahoos are undefeated after the first dozen games, and rank inside the top 10 nationally in both adjusted offensive and defensive efficiency. Currently, UVA is on pace to have one of the best offenses Tony Bennett has ever put together, too.

By this point, everyone knows the pieces. De’Andre Hunter is a bonafide stud, headed for the NBA Draft lottery. Next to Hunter, Ty Jerome continues to evolve as an NBA prospect (1.37 points per possession on spot-ups, per Synergy Sports), too, while Kyle Guy rips cords from deep range (45.6 3P%, 12.8 3PA per 100 possessions). Those three — flanked by several canny screeners and freshman playmaker Kihei Clark — are a force to deal with.

A few weeks back, we went over the challenges Hunter and Guy (or Jerome) present to opposing defenses with off-ball screens. For this edition of Inside The Playbook, though, let’s take a look at another two-man option UVA can utilize to attack a switch defense: high-low action.

Virginia’s final tune-up before ACC play came earlier this week: a 100-64 win over the go-go Marshall Thunder Herd, the most points ever scored by a Tony Bennett team. This was a throughly dominant offensive performance from the Cavs: 1.32 points per possession (62.9 eFG%), 26 free throw attempts, 12 three-pointers and 14 offensive rebounds.

Guy had it going from deep — seven three-pointers, which led to 30 points. Hunter did his thing, too: 11 points on only five field goal attempts. Late in the first half, those two combined for some nifty high-low action. This may seem small, and perhaps it is; however, it further details an import flexibility gene in Virginia’s offense. That’s not nothing, either.

A High-Low Mismatch for Virginia Basketball

In terms of half-court offense maneuvers, high-low basketball is nothing new. It’s old hat. However, when I think high-low tactics, my mind immediately goes to the “Grit and Grind” Memphis Grizzlies — with Marc Gasol and Zach Randolph carving out paint points off this action.

Back to the present: It’s a bear to defend when Virginia goes to its three-guard look — Guy, Jerome and Clark — next to Hunter, regardless of who’s the fifth player on the floor. That’s a lot of skill to defend; all of which is made more complicated by plus-shooting and crisp off-ball movements. Hunter, Jerome and Guy mesh together nicely.

So with the floor spread, Hunter sets a ball screen for Guy — who, by the way, is getting to the free throw line more this season (4.7 FTA per 100 possessions, up from 3.1 a year ago). Marshall switches on the ball screen, which is no surprise under coaching whiz and t-shirt aficionado Dan D’Antoni. This, however, is advantageous for UVA — as it puts a smaller defender on the lanky Hunter.

Immediately after the switch, Guy, who had dribbled left, doesn’t have an angle to submit a post entry pass to Hunter. No problem, though: Guy swings the ball quickly to Jack Salt as Hunter seals his new defender. Now Virginia has what it’s looking for: Hunter open at the rim.

Even with his defender wisely sagging way off, hoping the New Zealander will find some midrange courage, Salt still has room to fit this pass to Hunter, over the top, thanks in part to Jerome and Clark spacing (moderately well) to the weak side.

No one will confuse Salt as the fourth Gasol brother (32 career assists in over 1,600 minutes of action), but he puts nice touch on this pass, which allows only Hunter to grab it. (Note: Salt is handing out 2.8 assists per 100 possessions this season, up from a career average of one per 100 possessions prior to this year.)

According to Synergy Sports, Hunter has scored 1.16 points per possession (56.9 FG%) on non-post-up attempts at the hoop in the half court, while shooting 50 percent on post-ups. Overall, Hunter is shooting 68.8 percent at the rim, per The Stepien’s shot chart. (Note: Morgan State game not included in that data.)

Where else have we seen this?

One of the more exciting rookies in the NBA this season — in what appears to be a loaded first-year class — is Charlotte Hornets swingman Miles Bridges. The former Michigan State Spartan usually turns heads for his vicious dunks, which have come with some frequency this season.

Bridges, however, is more than just dunks; the rookie has shot 37 percent on corner three-pointers and over 68 percent in the restricted area. Charlotte loves to run this exact same high-low action to get Bridges touches with some room at the rim against a switch. Look familiar?

And here it is again. As soon as Bridges sets the ball screen and gets the switch, he seals and goes to the post. This has become a staple of Charlotte’s second unit offense.

NBA defenses are obviously far more likely to switch on screens that any college defense. However, this is a nice tool for Virginia to have in its back pocket if it encounters such a look down the road.

Pop-up Art: A look at the pressure De’Andre Hunter and Kyle Guy put on opponents