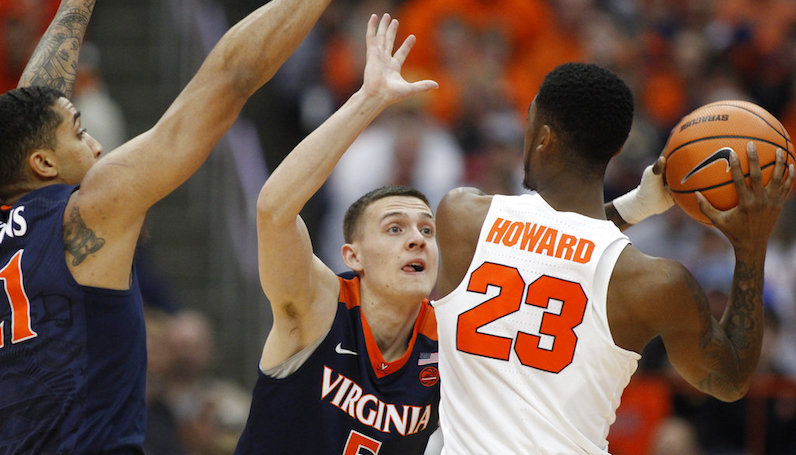 It may seem hard to believe, but Florida State basketball has become more efficient on offense in 2017-18 — even after Jonathan Isaac, Dwayne Bacon and Xavier Rathan-Mayes left Tallahassee. The Seminoles rank 17th nationally in adjusted offensive efficiency, according to KenPom: 118 points per 100 possessions, up from 115.5 last season.

Contributions have come from all angles; it’s an egalitarian approach. As a senior, Phil Cofer has evolved into one of college basketball’s top stretch forwards; Braian Angola put in work with the Colombian national team in the offseason, and is now a high-volume perimeter marksman. Terance Mann continues to invert the floor in the opposite direction, and score in wildly efficient fashion at the rim.

In ACC games specifically, FSU ranks third in the league in offensive efficiency. All of that is really great, and it’s why Florida State should head back to the NCAA Tournament.

However, this week, FSU will face its toughest challenge of the season: a Wednesday showdown with No. 2 Virginia basketball.

The Cavaliers aren’t just one of the nation’s top teams, though. Going up against Tony Bennett’s crew means a complete alteration of tempo, pace and attention to detail. A Florida State team that likes to push the pace will be met with one of the best defenses in recent ACC history.

As it currently stands, Virginia leads the nation in adjusted defensive efficiency, per KenPom: 82.3 points per 100 possessions. If this remains, this would go down as the stingiest defense of the KenPom era — which dates back to the 2001-02 season. In that span of time, only three other teams have given up fewer than 85 points per 100 possessions, in terms of adjusted efficiency.

That 2009 Memphis team featured Tyreke Evans — one of the most prominent names at this season’s NBA trade deadline — and a roster of long-limbed athletes. Louisville captured the 2013 national championship behind the peskiness of Russ Smith and Peyton Siva — along with the rim protection of Gorgui Dieng, who has become a solid backup post player in the NBA.

And my word, was that 2015 Kentucky talented: a handful of NBA players, including two future franchise building blocks — Karl-Anthony Towns and Devin Booker. Kentucky held opponents to under 33.4 percent shooting in 15 of its 39 games that season.

This is the company that Virginia is currently keeping. But we can dig a little deeper, too.

Looking back: Virginia basketball is in good company

Over the last six seasons — dating back to when Louisville when the title 2012-13 — only 17 ACC teams have held opponents to 0.8 points per possession with half-court man-to-man defenses, according to Synergy Sports. This batch of teams includes this year’s Cavaliers.

First off, a couple quick notes. Syracuse appears on this list twice; however, both mentions come with an asterisk. This chart centers specifically on man-to-man defense. Syracuse predominantly plays zone — an overwhelming majority of the time. In both 2017 and 2016, the Orange played less than 10 percent of its half-court defensive possessions in man-to-man, per Synergy.

Secondly, Louisville would have also qualified for this list in 2014 and 2013. However, the Cardinals weren’t yet members of the ACC. Therefore, they aren’t included on this list.

Virginia basketball is tied with the 2014-15 Louisville team for most efficient half-court man-to-man defense of the last half-dozen seasons. That Louisville team, by the way, was an overtime defeat away from making to to the Final Four.

Back to the present

There are a lot of ways to evaluate and rank basketball performance. But by these two metrics, Virginia basketball boasts one of the best defenses the college basketball universe has witnessed. It backs up what you see on the floor, too.

The Cavaliers rotate on a string, and with great effort. UVA neutralizes even to most talented of rosters, like Duke two weeks ago in Durham (0.97 points per possession). Teams can scout and prepare all they want; it’s another thing to then apply that against an army of defenders constantly talking and playing hands-up defense.

Inside the Playbook: How Isaiah Wilkins keeps UVA moving on offense