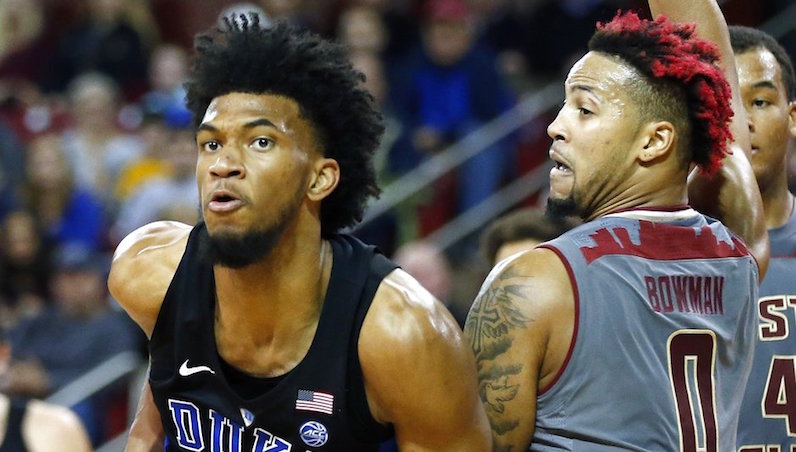 Duke’s loss on the road at Boston College last weekend wasn’t the first time this season the Blue Devils have been in a tight game in the second half. The young Blue Devils roared back in wins over Portland State, Texas, Florida and Indiana.

In the comeback over Texas, Duke got back into the game with a barrage of pick-and-rolls between Grayson Allen and Marvin Bagley. On the road against Indiana, Duke used off-ball screen action involving Allen to get Bagley low-post touches.

But against the Eagles: Duke, inexplicably, went away from the post.

That’s concerning, too, because Duke entered the bonus with 13:07 left in the second half. Theoretically, it should be even more inviting for Duke to attack the paint; if there’s contact, it’s an automatic trip to the line. However, the Blue Devils attempted just eight free throws after hitting the bonus. Grayson Allen accounted for four of those attempts, while Marvin Bagley attempted just two.

In the wins over Texas and Florida, Duke used 42 total post-ups possessions. Bagley accounted for 12 of 23 post-ups against Florida. Bagley also scored 30 points in that game, and shot 9-of-18 on two-point field goals.

In a diversion from the recent past, nearly 12 percent of Duke’s possessions are of the post-up variety, according to Synergy. That’s a big jump over a season ago: 6.6 percent. Wendell Carter and Bagley are shooting a combined 49.3 percent on post-ups this season, per Synergy. It makes sense to feed that duo; however, it simply didn’t happen against the Eagles.

Perhaps this was Mike Krzyzewski playing 4D chess, and inviting his team to learn a tough early season lesson on the road: If you don’t defend and look for the post, bad things can happen. Or perhaps this was a young team losing track of one of its key strengths. Remember: went just 8-of-30 on three-pointers in this game, too.

Regardless, there’s still a lot of basketball left to be played, including a marathon conference season. Duke will make sure Bagley and Carter get their looks.

Inside The Playbook: How Boston College, Ky Bowman torched Duke