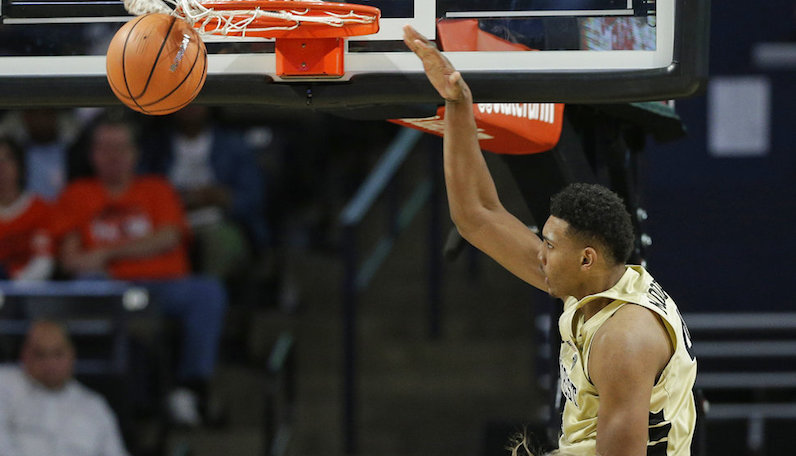 The departures of John Collins — the best player in the ACC last season — and Dinos Mitoglu left a big void in Wake Forest’s frontcourt. As the good folks at Blogger So Dear have pointed out, after totaling just 471 minutes and one start across his first two seasons at Wake, Doral Moore has stepped up.

Moore is one of three Division I players currently averaging 10 points, seven rebounds, one block and shooting at least 75 percent from the field. Let’s dig a little deeper, though, and glance at how Moore is excelling in an expanded role in Winston-Salem.

Nope, Winston-Salem is a Krispy Kreme town, baby. But: Lennard Freeman and Marvin Bagley are currently the ACC’s kingpins when it comes to finishing around the basket, but Doral Moore isn’t far behind.

Moore is shooting 84.4 percent on his two-point field goals, which ranks fourth nationally, per KenPom. Of course, a hyper-efficient percentage like this means a lot of attempts close to the basket.

On the season, Moore is 38-of-45 from the field. According to Synergy Sports, 32 of Moore’s field goal attempts have come on non-post-up possessions at the basket. Moore has connected on 26 of those attempts — 1.63 points per possession (No. 7 in the nation, minimum 30 possessions), 81.3 percent shooting.

That’s the kind of paint production you want on offense, especially next to Bryant Crawford — one of the premier drivers and passers of the basketball in the nation.

Moore has found success on post-up possessions, too. According to Synergy, Moore is 10-of-11 on post-up attempts, so far this season. The turnover numbers are still high, and he’s not going to shoot 90 percent all season long, but that’s a nice start for Moore. Look at the improvement over his first two seasons at Wake Forest.

On the defensive side of the floor, Moore certainly has some strengths. His reported 7-foot-3 wingspan allows him to be a strong deterrent at the hoop. According to KenPom, Moore has blocked 10.7 percent of opponent two-point field goals while on the floor. That’s consistent with his career rate, but considering that he’s play way more minutes now (21.8 per game), it’s encouraging to see that remain high.

All of that is great; however, the Demon Deacons continue to struggle defensively. Opponents are shooting 40.1 percent on three-pointers against Wake Forest — one of the worst numbers in the nation. Now, there’s almost certainly some bad luck baked into those numbers for Wake. But this defense has structural issues that extend beyond shaky three-point defense.

Currently, Wake Forest ranks No. 186 nationally in terms of adjusted defensive efficiency, per KenPom. During Danny Manning’s time in Winston-Salem, Wake has never ranked inside the top 125 of that key metric. Last season, John Collins and the team’s high-powered offense covered up for some of those blemishes. This season: well, not so much.

One of the concerns is Wake Forest’s pick-and-roll defense. The Demon Deacons prefer to have their bigs hedge hard on ball screens. I just don’t know why Manning continues to insist on this strategy, especially with Doral Moore at center.

For his career, Moore has committed 11.1 fouls per 100 possessions; this is way too much. Moore picks up a lot of these cheapies defending ball screens 26 feet from the basket — he hedges awkwardly and gets whistled when a guard dribbles into him. It’s a pointless exercise.

If I’m Wake Forest, I cut that out, and drop into a more conservative approach. We can see how potent Moore can be defensively at the rim. If he’s above the three-point arc, his shot-block artistry serves little purpose.