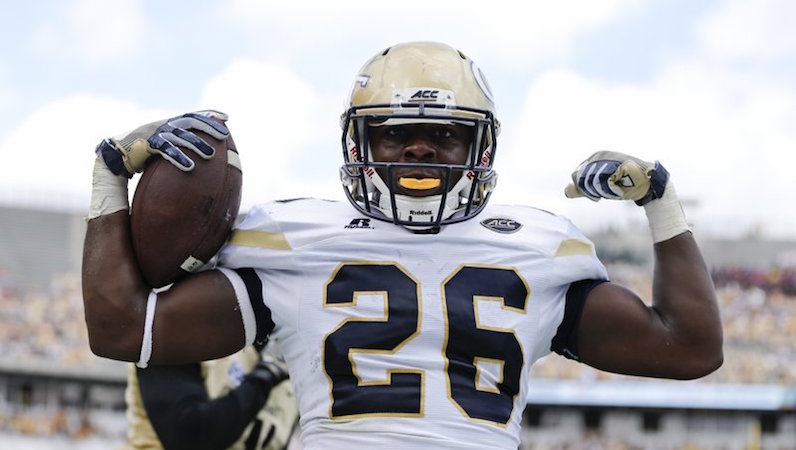 One of the most important positions in Georgia Tech’s option offense is that of the B-back. This is the player that lines up directly behind the quarterback — the trigger man of Paul Johnson’s option attack. With the 2017 on the horizon, Georgia Tech has its B-back of the present and future with Dedrick Mills.

The Yellow Jackets need the B-back to have success on interior runs; that’s what keeps the defense honest. Georgia Tech wants to break big plays on the perimeter, but to do that, the defense needs to lose contain. Option one out of this offense is feed Mills up the middle.

Off to a good start

Dedrick Mills put together an outstanding freshman season for Georgia Tech. Despite playing in only nine games — he missed two due to suspension — Mills led the team in the triple crown of rushing stats: carries (152), yards (771) and touchdowns (12).

Mill was a touchdown machine; in fact, he finished sixth in the ACC in rushing touchdowns — behind only Lamar Jackson, Dalvin Cook, Wayne Gallman, James Conner and Mark Walton. That’s multiple NFL players and the Heisman Trophy winner.

As a freshman, Mills was the only player in the ACC to record double-digit rushing scores on fewer than 200 carries.

He also closed out the 2016 season and calendar year with a bang, too. In Georgia Tech’s New Year’s Eve bowl victory over Kentucky, Mills ran wild: 169 yards on 31 carries and a touchdown.

These basic counting stats only tell part of the story with Mills, though. According to David Hale of ESPN, Mills was one of the most effective rushers in college football. Less than six percent (5.9%) of Mills’ carries went for zero or negative yards.

The next closest player was Texas Tech running back Da’Leon Ward, who had 7.8 percent of his carries go for zero yards.

Opportunity rate is another statistic used by the excellent Football Study Hall. It measures the percentage of carries in which the running back runs for at least five yards. The offensive line plays a big role here, too. However, it’s impressive considering how many of Mills’ attempts are right at the heart of the defense.

According to Football Study Hall, Mills posted an opportunity rate of 43.4 percent; this was the best number on Georgia Tech’s roster amongst players with at least 40 carries. Considering how few of his carries went for negative yards, it’s no real surprise he had such a lofty opportunity rate. He isn’t the quickest of rushers, but Mills is incredibly tough and powerful.

Mills was one of just six players in the ACC this season to carry the ball at least 150 times and post an opportunity rate above 40 percent. This is really good company for Dedrick Mills to be in.

*Note: The stats of Jerod Evans and Lamar Jackson don’t include sacks as carries

Georgia Tech plans to part ways with Russell Athletic in 2018