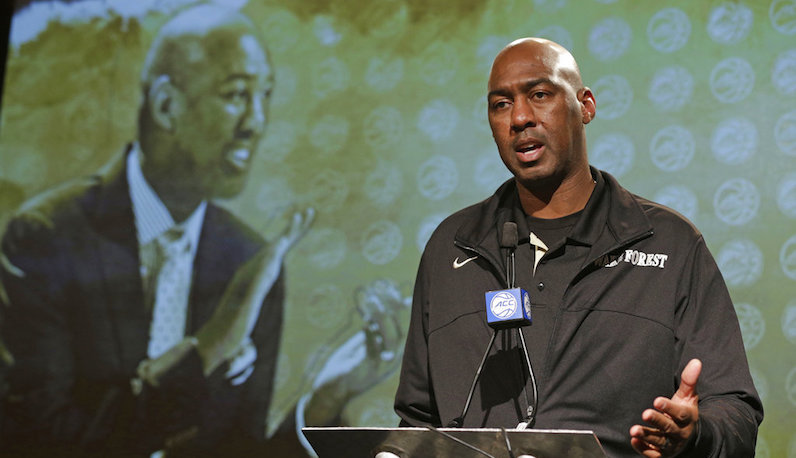 Wake Forest turned the page on a new era of basketball last season. The Demon Deacons ended a near decade-long draught of NCAA Tournament appearances, and they did so in style, too. Led by All-ACC stud John Collins, the Deacs played a wildly exciting blend of efficient and high-scoring basketball.

Collins is in the NBA now, though — destroying rims on the professional circuit for the Atlanta Hawks. The nation’s No. 7 offense from a season ago is now out its best player.

78% of his FGA have occurred at the rim (within 4 feet). Collins is shooting 61 FG% on those attempts, too. He's gonna be goooood. https://t.co/E9VAuObwF9

Bryant Crawford and Keyshawn Woods form one of the best backcourts in the college basketball; freshman Chaundee Brown is ready to roll, too. However, the departures of Collins — and Dinos Mitoglu, who left to go play professionally in Greece — leave the Deacons thin up front.

At ACC Media Day in Charlotte, coach Danny Manning spoke about this:

We have to replace what John Collins and Dinos Mitoglou brought to the table, not only with their scoring ability but their rebounding ability. So those guys almost got 50 percent of the rebounds for us last year. So we’re going to have to be a team that gang rebounds — everybody is going to have to go in there and get their share. And then we’re going to have some big guys that night in and night out provide a presence for us defensively and offensively.

John Collins was Wake Forest’s lynchpin last season; the offense revolved around him. Collins used a mammoth number of possessions. According to KenPom, Collins posted a usage rate of 29.4 percent, which ranked No. 65 nationally.

More specifically, though, Wake will miss Collins’ post touches, rim runs, offensive rebounds — and the open shots his gravity created for other teammates.

Doral Moore was No. 3 on Wake Forest with 37 post-up possessions; he was the only other player in double figures here.

The Demon Deacons connected on 77 put-back field goals — attempts following an offensive rebound, per Synergy. Collins and Mitoglu combined for 50 of those field goals — 64.9 percent.

Wake Forest’s spread pick-and-roll attack hovered around Collins, who punished defenders with rim runs. According to Synergy, Collins shot 89.3 percent and scored 1.74 points per possession on basket rolls. That ranked No. 1 nationally amongst players with at least 30 possessions.

That’s a lot of possessions and production that must be replaced on the fly.

Danny Manning knows this team has to control the perimeter; that’s where its talent and experience exist. “We’ll be a very guard-dominated team just in terms of the locomotive, engine for us this year,” Manning stated in Charlotte. “Those guys have to go out and they have to perform at a high level for us.”

The team, however, isn’t devoid of frontcourt options. This is where Terrence Thompson — a graduate transfer from Marshall — can help some. Thompson shot very little out of pick-and-roll action last season for the Thundering Herd; however, at Marshall, Thompson played in one of the nation’s top pick-and-roll offenses.

Doral Moore is a very interesting option for Danny Manning, too. The 7-foot-1 junior has appeared in 61 games over his first two seasons at Wake Forest. But he’s played 15 or more minutes only four times in his career. Is he ready for a bigger role?

Part of the issue with Moore is his propensity to pick up fouls — on either hacks at the rim, or reach-ins 25 feet from the basket in pick-and-roll coverage. Last season, Moore was just the second ACC player since 2009-10 to commit at least 60 personal fouls in under 300 minutes of action. Moore committed nearly 10 fouls per 40 minutes.

Can Moore stay on the floor and be stronger with the ball in 2017-18? If so, then Danny Manning and Wake Forest can stay afloat inside while using Woods and Crawford to push the pace.