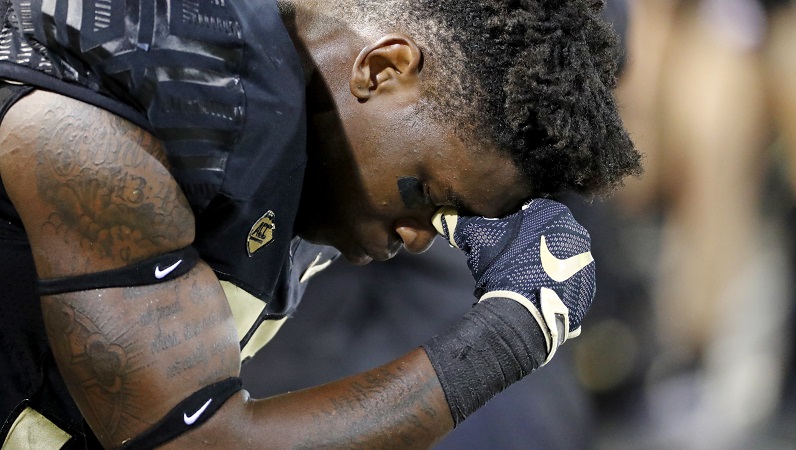 Dave Clawson’s job this week may be as much mental as physical with his football team and his coaching staff. Clawson has to continue to stress the desire to remain in the game plan, both for the season and on the field.

For the season, the Deacons are really exactly where most people believed they would be at this point. The schedule seemed to set up for four straight wins, then losses to Florida State and Clemson with a tough road game against Georgia Tech.

Figuring that an upcoming game at Notre Dame would be a loss, it always seemed like the season would come down to winning two of these four games: the “revenge” game at home against Louisville, a road game at Syracuse and home games against NC State and Duke.

The only thing that has changed from the preseason is that Syracuse and NC State appear to be better than predicted.

So the Wake Forest players have to get over the fact that the Deacons believe they were in position to beat both Florida State and Georgia Tech but came up empty. Clawson is clearly worried that those losses will beat down his team.

At this week’s press conference, he said that he’s told his players: “‘Well, you can keep pushing and put ourselves in position to win these games, or if you stop pushing these games will be 52-7.’”

Stick to the plan

Clawson also has to emphasize sticking to the gameplan with his coaching staff.

Heading into the Georgia Tech game, the Deacons were focused on time of possession and getting touchdowns, not field goals, at the end of drives. They did just that in the first half, taking advantage of a Georgia Tech defense that had shown weakness against the run.

Wake Forest scored on three straight possessions, and they did that damage by sticking to the ground game. On those three drives, the Deacons ran 16 times to nine passes (64 percent run). They gained 98 yards on the ground for an average carry of 6.1 yards.

Perhaps even more important, the staff was not afraid to call runs on downs that usually scream pass. The Deacons ran on third and six, second and eight and twice on second and six.

The second half clearly didn’t go so well. The first two drives were three and out. The first ended up in third and 30 after a penalty and confusion on a snap. On the second, Arkeem Byrd gained nine yards on the ground on second down, but Cade Carney was stopped on third and one.

At that point, the momentum had swung to Georgia Tech, but the score still hadn’t. The Wake Forest coaching staff, however, seemed to panic a bit, changing to more pass plays. Some of this could have been a reaction to changes that GT made defensively and an injury to left guard Phil Haynes, but the calls appeared to change as some desperation set in.

On the next four drives, all with the game still in reach, the Deacons passed on 13 of 23 plays (43 percent run). They chose to pass on third and fourth downs with four yards to go.

Interestingly, the game plan could be just the opposite this week against Louisville. Although the Cardinals gave up a whopping 364 yards to Boston College on the ground, they are still much more vulnerable through the air.

Louisville is allowing the ACC’s best completion percentage at 59.9, as well as the third-highest average yards per pass and third most passing touchdowns. The Cardinals surrendered 384 yards to two UNC quarterbacks, 316 to Kelly Bryant of Clemson, 367 to Ryan Finley of N.C. State and 248 to James Blackman of Florida State, who had averaged 174 yards in his previous three starts.

Whatever the plan is, if it’s working, the Deacons need to commit to sticking with it, not upending it in reaction to Louisville. Same goes for the season: The Deacons have to stick to the plan going forward, not worry about what happened in the past.