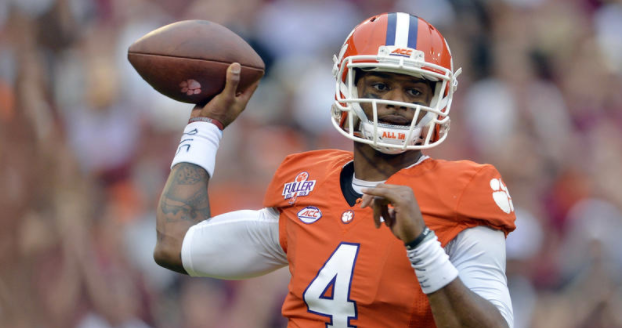 Saturday night in Orlando will be the setting for this year’s ACC football championship game. No. 3 Clemson is looking for their second straight ACC crown, and another ticket to the College Football Playoff. Standing in their way: The No. 23 Virginia Tech Hokies, who have been a wild success in Justin Fuente’s debut season, winning nine games.

There are a million different ways to breakdown this game; however, I want to draw special attention to one specific matchup: Clemson’s passing game, and their arsenal of receivers, against Virginia Tech’s pass defense. Both rank inside the top ten in a variety of key metrics. Both also figure to weigh heavily on the outcome of Saturday’s showdown.

Clemson has one of the best and most accomplished players in college football history pushing the pace of their go-go-go offense: quarterback Deshaun Watson. While his running totals are way down, the Tigers signal caller could actually outperform his gaudy passing numbers from 2015 with a few more splendid performances. Airspace, however, may be tough to come by against the Hokies. Luckily for Watson, he has host of perimeter playmakers, including his favorite target, junior Mike Williams, to disperse the ball to.

Williams is among the nation’s best, and could very easily be a first round selection when the NFL Draft rolls back around. He’s far and away Clemson’s most targeted receiver (111 targets, 23.2 percent target rate), according to Football Study Hall. If not for an injury against Wofford the cost him almost all of last season, there’s a good chance the 6-3 Williams would already be running around on Sundays this fall, terrorizing some undersized secondary.

This is more than just a one-man show, though. Artavis Scott, who recorded 93 catches in 2015, has seen his production slip with the return of Williams — who has gobbled up much of Watson’s attention. However, Scott has still proven to be dangerous: 63 receptions, five touchdowns and a sizzling catch rate of 78.8 percent, which is tops on the team. Scott is a gift return man, who can carve up a defense with run after the catch yards. First team All-ACC Jordan Leggett is a matchup nightmare; he’s a tight end who averages nearly 12 yards per target. Watson also trusts him in high-leverage situations — think back to his game-winning touchdown against Florida State a few months back.

Oh, but that’s not all. Sophomore Deon Cain averaged 18.4 yards per reception (10 yards per target), and caught nine touchdowns — two of which came in the win over Louisville. Cain’s nine touchdowns rank third in the ACC, too. Before the season started, ACCSports.com predicated Ray-Ray McCloud as one of our breakout stars. And while his most salient memory from 2016 is an unflattering one — a fumble caused by a premature celebration following a 75-yard punt return that should’ve gone for a score — McCloud has still been really good. Watson has targeted him 11.2 percent of the time, and McCloud has hauled in better than 77 percent of those attempts (44 receptions). Big things await both Cain and McCloud next season.

Last but not least — Hunter Renfrow played in just eight games this season due to injuries, but he still snagged 68 percent of the passes thrown his direction, and collected three touchdowns. All together this is an embarrassment of riches that produced a pass offense that ranked ninth nationally in Passing S&P-plus (128.6) and sixth in Success Rate (51.5 percent), according to Football Study Hall. That high Success Rate, which essentially measures how often an offense stays ahead of the chains, can be attributed to Watson’s archer-like accuracy in Clemson’s short passing game, which focuses on getting the ball quickly to their bouncy playmakers in space.

That bunch will have their hands full, though, against Bud Foster’s once again magnificent defense. The Hokies, according to cfbstats.com, allowed just 78 pass plays that went for 10-plus yards, which is the best number in the ACC. Virginia Tech’s defense ranks sixth nationally in both Passing S&P-plus (130.5) and Success Rate (32.4 percent). (The national average in Success Rate is around 41 percent, for the record.)

On passing downs, they get even tougher, which is why Clemson will need balance and to stay on schedule. Opponents are experiencing a Success Rate of just 20.9 percent on passing downs against Tech — the fourth best mark in the FBS. The Hokies, who intercepted 12 passes this season, are a disruptive crew on defense. That unit has on overall Havoc Rate of 21 percent, which means that on one-fifth of their opponents’ plays Virginia Tech recorded either a tackle for loss, forced a fumble, or defensed a pass. This ranks No. 6 in the nation.

The Hokies are powerful along their defensive line — Ken Ekanem was 12th in the ACC this season with 6.5 sacks — and of course their secondary packs a punch, too. Greg Stroman and Terrell Edmunds each intercepted three passes this season, which is tied for the fifth most in the ACC. Let’s see who gets the upper hand in this situation.

Nothing left to do but play the game. Giddy-up.