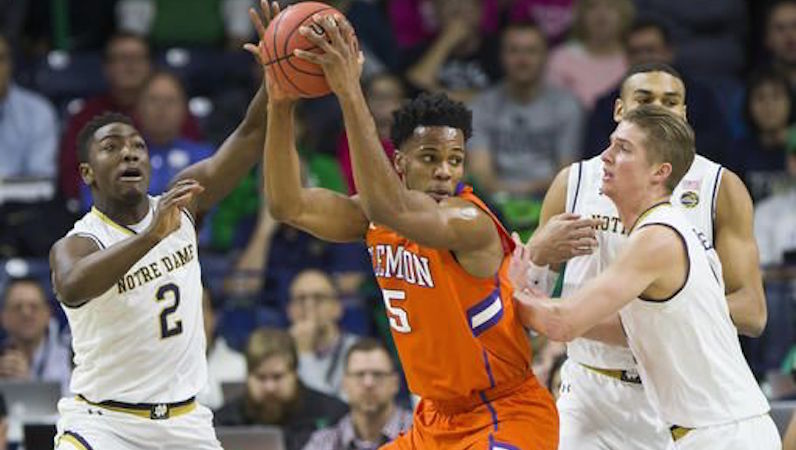 Jaron Blossomgame ranks eighth in the ACC in scoring with 17.2 points per game. (AP Photo)

This year’s Clemson team is the best offensive unit Brad Brownell ever assembled at the program. Four players, led by Jaron Blossomgame, score in double figures; according to KenPom.com, the Tigers score 116.9 points per 100 possessions, which ranks No. 29 in the nation.

Unfortunately for stakeholders in the program, a lackluster defense and a plethora of nail-bitting losses have likely undone Clemson’s best shot at an NCAA tournament since the 2010-11 season.

According to ESPN’s Joe Lunardi, the Tigers are on the wrong side of the March Madness bubble. The team is 15-14; unless they go on a magical run in Brooklyn, the Tigers appear destined for, at best, an invitation to the NIT.

Back to those aforementioned narrow defeats. Clemson has dropped 14 games this season; a dozen of those losses have come in ACC play. Taking this one step further, though, of Clemson’s 12 conference losses, nine have come by six or fewer points — two-possession games. On the whole, the Tigers have a 2-9 record in ACC games decided by six or fewer points. If Clemson approaches a .500 record in these type of contests, there is a strong chance this team is dancing.

Clemson lost just twice in nonconference play; both of those defeats, which came against quality opponents in Xavier and Oklahoma, were also the results on two-possession games.

For the record, Clemson went 2-1 in ACC games decided by 7-9 points.

It has not been all bad luck for Clemson, however. The Tigers have shot themselves in the paw a few too many times, though. Take for instance the loss at Duke. Clemson put forth a valiant effort to race back and nearly win the game, but on the game’s final possession — as Duke clung to a two-point lead — the Tigers inbounded the ball at midcourt and ran a play that could be best described as shaky.

Shelton Mitchell dazzled against the Blue Devils, but he faced an incredibly challenging situation. With only 4.3 seconds remaining, you simply cannot have the person receiving the inbounds pass running in the opposite direction of the basket they are trying to score on, especially when that takes place on the other side of half court. Mitchell, before having his last-second prayer altered by Frank Jackson, does not even cross the timeline until under two seconds remain in the game.

Clemson will return a handful of talented sophomores and juniors next season. They include Mitchell, Marcquise Reed, Elijah Thomas and Donte Grantham, who will need to bounce back from a disappointing 2016-17 campaign. Brownell is a good coach, but after three straight seasons of averaging better than nine ACC wins, this year-long slump reads as a letdown.

Fair or not, the story of Clemson’s season will be narrow defeats and the wonder of what could have been. On the bright side, there’s always next year.