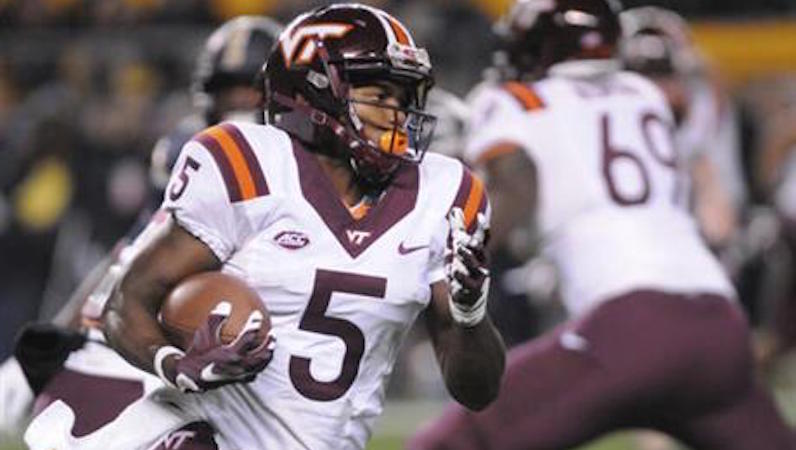 Virginia Tech’s passing offense will take a hit in the 2017 season. Gone are All-ACC stalwarts: Isaiah Ford, the program’s all-time leading receiving, and tight end Bucky Hodges. Both will play on Sundays this fall. Quarterback Jerod Evans decided to follow suit and enter the NFL Draft early, too.

However, Justin Fuente and the Hokies return at least one certainty on the perimeter: senior receiver Cam Phillips.

Lost in the shadows of Ford’s brilliance, Phillips was one of the most dynamic receivers in the ACC last season. According to Football Study Hall, Phillips was targeted 97 times in 2016. He hauled in 76 of those passes, which ranked sixth in the ACC for a sterling catch rate of 78.4 percent.

One could make the case that Phillips was a more efficient target than Ford and Hodges this past season. He posted a higher catch rate and averaged more yards per target.

Phillips ranked fifth in the ACC with 983 yards receiving; he was also one of just 28 players in the league to catch at least five touchdown passes. He is not just a dink-and-dunk bubble-screen receiver. Phillips can take the top off of a secondary. According to cfbstats, he recorded 22 receptions of 15-plus yards in 2016.

As a junior, Phillips saved some of his best performances for Virginia Tech’s biggest games. He hauled in six passes for 109 yards, and ran for an additional 43 yards, in a three-point victory over Pittsburgh. In the ACC Championship Game against Clemson, Phillips snagged a game-high 12 passes for 92 yards and a touchdown. He was named MVP of the Belk Bowl, catching six passes for 115 yards in Tech’s stunning 24-point comeback victory.

Virginia Tech will need Phillips to be the main dude in the passing game next season, which could complicate matters. Of course he will be targeted more frequently, but opponents can start to roll coverages in his direction without the fear of Hodges occupying the middle and Ford stretching the field. It is imperative that the Hokies find ways to build the position group around Phillips, which is something they will work on in spring practice.

Uncertainty exists at the quarterback position, too. Evans was expected to be in Blacksburg another season, but that plan has swiftly flown out the window.

A trio of quarterbacks will compete for the job, including JUCO prospect A.J. Bush, who committed to Virginia Tech in January. Bush will compete with redshirt freshman Josh Jackson and 2017 signee Hendon Hooker, an early enrollee who’ll go through spring drills.

Regardless of who lands the gig, expect a heavy dose of Cam Phillips targets as the senior looks to leave his final mark on the program.