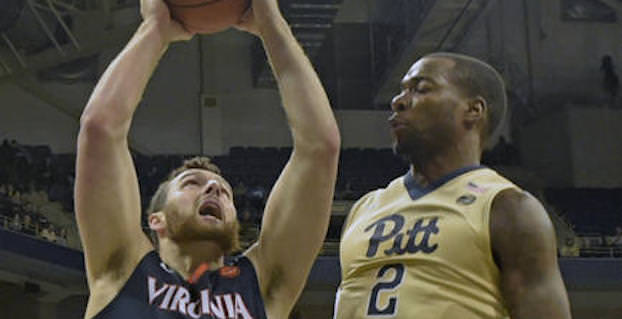 Virginia forward Jarred Reuter (31) goes up for a shot against Pittsburgh forward Michael Young (2) during the first half of an NCAA college basketball game, Wednesday, Jan. 4, 2017, in Pittsburgh.(AP Photo/Fred Vuich)

After launching the conference schedule with a one-point loss last week against Notre Dame, Pitt responded at home Wednesday night with an overtime upset of No. 11 Virginia, 88-76.

The Panthers were led by one of the best two-headed monsters in all of college basketball: Michael Young and Jamel Artis, who made enough plays to overthrow one of the top defensive units in America.

Young shoots the ball more frequently and uses a higher volume of possessions, but it was Artis who stole the show with one of the more interesting shooting lines in recent history. Artis, who finished with a game-high 24 points, did not make a single shot inside the three-point line (0-of-5). The senior point forward missed 50 percent of his free throws, too (6-of-12). However, he went bonkers from beyond the arc, making a career-high six three-pointers on seven attempts.

The post-up game of Young worked wonders for Pitt at times, especially in the second half; he scored 19 points in 41 minutes of action. His interior passing was on display as well. Young handed out five assists (the seventh time this season he has recorded at least four assists); one pass found its way to Artis for a dagger three-pointer that capped a 9-0 run to start the bonus period.

Three of Young’s assists led to slam dunks — two for Sheldon Jeter, one for Ryan Luther. All four of Artis’ assists resulted in three-pointers — two for Cameron Johnson, two for Jeter.

Artis and Young scored or assisted on 66 of Pitt’s 88 points. According to Sports-Reference, Young used 34.3 percent of Pitt’s possessions when he was on the floor, while Artis used another large share — 27.1 percent. That’s been a theme this season. Young leads the ACC in usage rate (32.8 percent), while Artis ranks seventh (27.6 percent).

Pitt has a strong seven-man rotation, but Wednesday evening’s showing was further evidence that ACC teams will have trouble unplugging the buzzsaw that is Artis and Young. Virginia entered the meeting with Pitt No. 2 in the nation in defensive efficiency, per KenPom. This game ran at a slow pace, which should come as no surprise; Virginia ranks dead last (No. 351) in KenPom’s adjusted tempo ratings (59 possessions per game). Pitt, also, prefers a more plodding stride: 68.3 possessions, No. 230 in the nation.

Virginia — under Tony Bennett — has excelled at limiting the top option of an opponent. For years, Malcolm Brodgdon frustrated foes, taking top perimeter players out of their zones. Brogdon is in the NBA now, playing exceptional ball for the Milwaukee Bucks, but Virginia is still a force defensively. It is an extraordinary accomplishment from Young and Artis to produce like this against arguably the best defense in college basketball. (The Cavaliers allow just 89.1 points per 100 possessions.)

The Panthers will go as far as their star seniors can take them. Two is enough to tango; it is also enough to win a bunch of games.