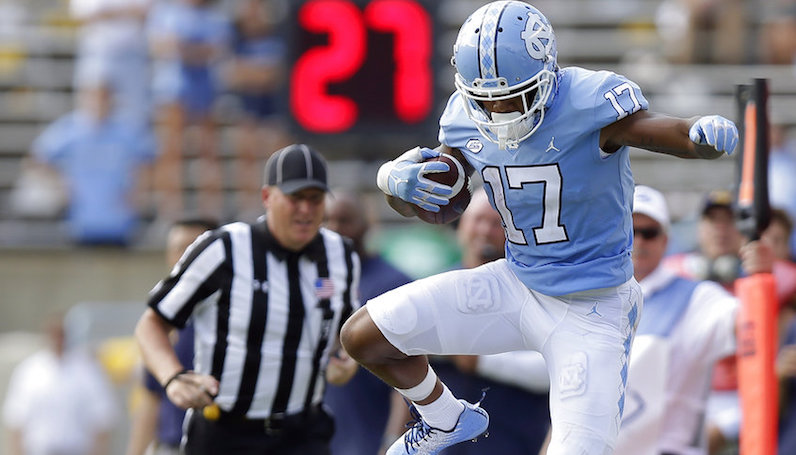 Anthony Ratliff-Williams looks like he may be on the verge of big things for North Carolina. Can one of UNC’s top playmakers keep it up?

North Carolina football fell to 1-3 on the season after a disappointing loss to Duke on Saturday, 27-17. The 2017 season has been a serious challenge in Chapel Hill — in large part because of a series of injuries.

Veterans Andre Smith and Thomas Jackson are already out for the remainder of 2017; now Austin Proehl’s career could be in jeopardy, too. This means new opportunities for new players.

As a redshirt freshman in 2016, Ratliff-Williams was lightly used. He recorded three catches and returned seven kicks. Of course, North Carolina’s depth chart at wide receiver was loaded then; Ryan Switzer was the team’s star in the kick game, too.

It’s a new day, though, for UNC — and by extension, Anthony Ratliff-Williams.

From QB to all-purpose stud

Ratliff-Williams plays out wide now, but three years ago, he arrived in Chapel Hill as a 3-star recruit at the quarterback position, which he played at prep power Butler High School in Matthews, North Carolina.

Two weeks after taking a kick back 94 yards for a touchdown against Louisville, Anthony Ratliff-Williams had his breakout performance in the receiving game.

UNC blocked an Austin Parker field goal with 22 second left before halftime; then Ratliff-Williams took to the skies.

The Tar Heels moved the ball 80 yards in two plays — both outstanding receptions by Ratliff-Williams, including his first career touchdown.

According to Sports Reference, Ratliff-Williams is one of only four FBS players with 150-plus receiving yards, and at least one touchdown reception and one kickoff return for a touchdown, too.

Ratliff-Williams has returned 15 kickoffs this season (not a great look for UNC’s defense), which is the most in the ACC. Those returns have gone for 420 yards — No. 1 in the FBS. He’s one of only four ACC players with at least two kick returns of 30-plus yards in 2017.

Not a bad start

In total, Anthony Ratliff-Williams had five catches for 125 yards and a touchdown against Duke. He’s one of just nine ACC players to catch at least five passes for 120 yards and a score this season, per Sports Reference.

Going back to the 2000 season, this was just the 24th time a UNC receiver has hit those benchmarks in a game — joining some good company: Hakeem Nicks, Ryan Switzer and Eric Ebron.

Is UNC out of the Zion Williamson sweepstakes?