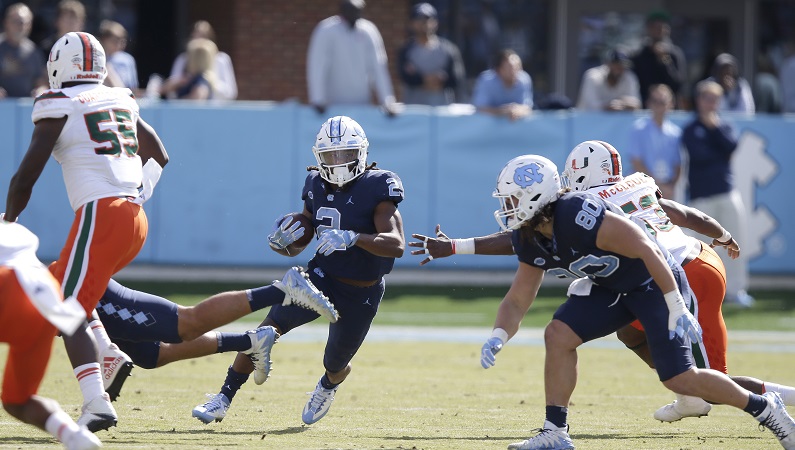 The 2017 season has been an unmitigated disaster for Larry Fedora and the UNC football program. A combination of injuries, early departures to the NFL, and numerous struggles on the field has resulted in a 1-8 start. After going an entire calendar year without a victory over a Power Five opponent, North Carolina’s football program has reached depths this fall not seen in over a decade. The big thing the Tar Heels have left to play for is avoiding going winless in ACC play for the first time since 1989.

But there is optimism that things will improve for UNC next fall. That’s partially based on the concept that it can’t get a whole lot worse. But it’s also based on the fact that UNC will return a more experienced Chazz Surratt, as well as the team’s top three rushers (Surratt, Jordon Brown, and Michael Carter).

The Tar Heels are getting much-needed help in the receiving corps in the form of prized signee Jordyn Adams. Adams, the son of UNC defensive line coach Deke Adams, won’t have to wait long to play, as the Tar Heels are in desperate need of a playmaking wide receiver.

UNC will miss departing seniors Cayson Collins, M.J. Stewart, Bentley Spain, R.J. Prince, and Dajaun Drennon. And they’ve been missing injured wide receiver Austin Proehl, defensive lineman Tyler Powell, and linebacker Donnie Miles. But the Tar Heels will be returning more starters than they are losing. The UNC receiving corps has already been forced to adjust to life without Proehl, who was lost in September to an arm injury.

UNC’s defense has made some gradual strides after getting embarassed early on by Louisville. An improving secondary will return Myles Dorn, J.K. Britt, and K.J. Sails, among others. The Tar Heels will get significant help at linebacker in the form of Payton Wilson, although Wilson recently suffered an ACL tear, and may not be immediately available.

Fedora is going to be forced to do some soul searching this offseason. Was it the right move to place the hands of the offense in Chris Kapilovic, his longtime offensive line coach at Southern Miss and UNC? Can Kapilovic make a seamless transition back to exclusively coaching the offensive line if another coordinator comes aboard? And how will the returning players respond to any proposed coaching changes?

UNC also must get much more disciplined to improve in 2018. Through nine games, the Tar Heels are dead last in the ACC in penalties (70), penalty yardage (647 yards), and penalty yards per game (71.9 yards). Improvement in terms of personnel and coaching won’t make much of a difference unless the Tar Heels can avoiding shooting themselves in the foot.

How the Tar Heels answer these questions will largely determine if UNC can improve next fall. It would also help UNC’s cause if they can avoid the types of large-scale injuries that plagued this year’s club.

Insiders around Chapel Hill insist that Fedora is safe, despite this year’s gridiron disaster. That’s partially due to a massive buyout owed to Fedora if he was fired after the current season concludes.

But if Fedora doesn’t address the playcalling and discipline concerns that compounded all the other adversity UNC has faced this season, he’ll be on the hottest seat in the ACC this time a year from now.

Read more: Who will be the fifth starter for UNC?