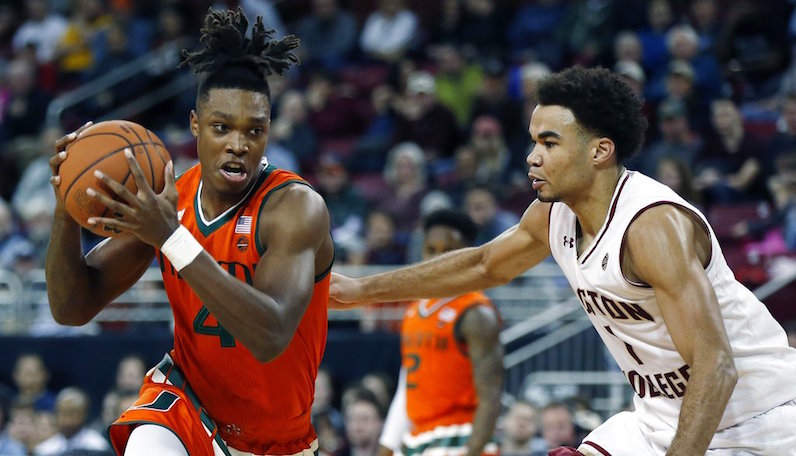 Miami's Lonnie Walker IV (4) drives for the basket against Boston College's Jerome Robinson (1) during the second half of an NCAA college basketball game in Boston, Saturday, Feb. 10, 2018. (AP Photo/Michael Dwyer)

ACC basketball weekly honors are determined by a vote of a 15-member media panel. Robinson and Nwora were both recognized for the first time this season.

The Eagles’ Robinson averaged 37.5 points and 3.0 rebounds as Boston College dropped a road game at Notre Dame and defeated No. 25 Miami at home. Robinson’s 46-point effort against Notre Dame tied for the fourth-highest ever in an ACC game and were the most ever by a visiting player in a conference game.

Robinson, who went 15-of-23 from the floor and 7-of-12 from 3-point range against the Fighting Irish, also tied the second-highest single-game total in Boston College history and registered the highest by an Eagle since Tyrese Rice also scored 46 versus North Carolina in March of 2008.

Saturday’s 29-point effort against Miami saw Robinson score 18 points in the second half. The Raleigh, North Carolina, junior scored six of the final nine points in a 9-0 run that closed out Boston College’s win. Robinson finished 10-of-15 from the floor and 8-of-9 from the foul line against the Hurricanes.

Nwora, who played an average of 16 minutes per game, scored a team-high 16 points with four rebounds and four steals as Louisville prevailed over Georgia Tech. The 6-8 forward from Buffalo, New York, totaled 13 points, six rebounds and two assists while connecting on 5-of-6 field goals as part of a balanced scoring attack as the Cardinals won at Pitt.