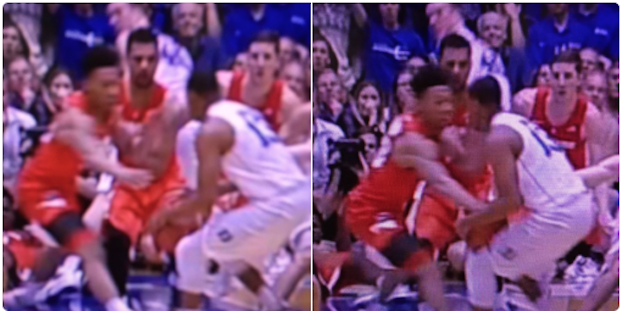 Duke lost its third straight game, and second straight at Cameron Indoor, 64-62 to Syracuse on Monday.

As always seems to be the case in a Duke-Syracuse game, one of the main topics of discussion afterward was the officiating.

A Grayson Allen buzzer beater at the end of the first half was waved off, and the three points would have been the difference in the game. That play was virtually forgotten, however, after the events in the final seconds of the contest.

Allen drove the lane and put up an awkward scoop shot with 6.9 seconds remaining and Duke trailing by one. It wasn’t close, and the loose ball caromed down, near the free throw line. With 4.3 seconds left, Duke’s Matt Jones came charging in from near the 3-point line. From an equal distance away, in the opposite direction, Syracuse’s Malachi Richardson made a beeline for the ball.

Both players were running full speed, with their full attention on the ball. Jones appeared to get his hands on it first, for an instant, before the two collided. Richardson came away with the ball and was fouled.

After Richardson hit his first free throw, the second bounced off the rim, and Jones got the rebound with 2.1 seconds remaining. There appeared to be a lag before the clock began, and Jones took several dribbles before attempting a shot from beyond half court. Syracuse double teamed him, and he couldn’t get the shot off. 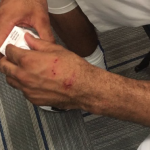 After the game, Jones showed the media a cut on his left hand that looked like bite marks, saying he received it during one of the scrambles at the end of the game.

Coach K called the no-call on the collision between Richardson and Jones “amazing” during an interview with the Duke radio crew. In his press conference a few minutes later, he used the word “amazing” no less than 10 times.

“We did (drive to the basket) right at the end of the game, and it was an amazing ending,” Krzyzewski said. “Amazing. … Have you seen it? Well, go see it. It’s literally amazing.”

During his next answer, Krzyzewski said, “Just … It’s amazing basketball. Let’s put it that way.”

“When you see amazing, then you’ll … y’know … It’s like … amazing.  Just know … when you see something like an unbelievable beauty … like one of the wonders of the world … It’s unbelievable, and that’s what makes it amazing.”

Krzyzewski then sighed, but he wasn’t done.

So here’s a call-by-call, and at times frame-by-frame, look at the amazing officiating during Duke’s loss to see who has a legitimate gripe:

Of all the calls, this one appears to be the most clear-cut. 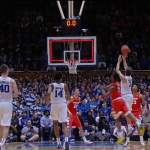 Clock is at zero, red light is lit, and the ball is still in Allen’s fingertips. No good. The referees got this one correct.

Syracuse actually had a foul to give and was actively trying to foul Allen before he got his scoop shot off inside of 10 seconds. However, he was in the clear on the shot itself, and a no call was the right call on this play. 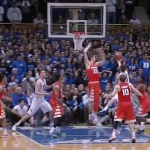 This one is tough. Here, both players are already sprinting, like runners out of the starting gate, to where the ball is going to come down. Richardson has one foot inside the charge circle, one next to the white block outside the paint. Jones is beyond the 3-point line on the right. 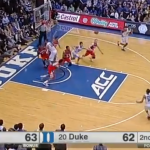 They arrive nearly simultaneously, at full speed. Mark Armstrong of WTVD TV reports that the following images are two frames apart, a time span of 1/14 of a second. 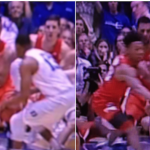 Jones gets his hands on the ball first, but by the time he secures the ball to his hip, Richardson has a hand on it as well. Had the two players stayed in that position, the correct call would have been a held ball. The possession arrow belonged to Syracuse.

Of course, Jones and Richardson were moving toward each other. So staying in that position wasn’t possible. Richardson lowered his shoulder and pivoted his body, either to wrench the ball away or to protect himself at the last minute. The result was that he hit Jones in the chest with his forearm. Jones threw his hands up in the air, either due to the force of the hit or in the hopes of drawing a foul call. The ball bounced away, and Richardson was fouled as he retrieved it.

It appears to be a 50/50 ball. At live speed, it’s clear that neither player had possession of it for any measurable amount of time. Richardson’s arm swing takes place on virtually every rebound in a game–he didn’t throw an elbow or do anything foul-worthy.

It was a violent collision, but a no call in that situation isn’t “seven wonders of the world amazing”, despite Coach K’s claims to the contrary.

Jones’ left hand never came into contact with Richardson’s mouth during the collision, and his left hand is visible for the entire time during his last-ditch heave from beyond half court. Clearly, SOMETHING happened to the hand at the end of the game. 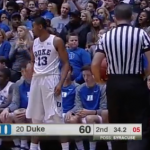 ESPN caught Jones’ hand as he prepared to inbound the ball with 34.2 seconds remaining, and there are no visible injuries. So it wasn’t an old injury he was trying to pass off as evidence of a foul.

The best bet is that Jones’ injury came from the mouth of Trevor Cooney. After colliding with Richardson, Jones threw both hands in the air, and it appeared that his flailing left hand may have struck Cooney, who was standing behind him.

In this shot, Cooney (to the right of the foul line) appears to be reacting as if he’d been hit in the mouth. 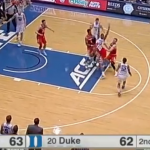 Furthermore, as his teammates celebrated following the Duke foul on Richardson, Cooney went off alone, by the sideline, and leaned forward, gathering himself. 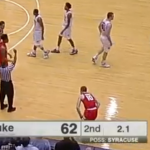 It appears that the injury to Jones’ hand was not the result of a foul, but rather a fluke, and Cooney may have gotten the worst of it.

Jones gathered the missed free throw and tried to get off one final buzzer beater. There were claims on Twitter that the clock started late on his rebound, giving Duke more time to get off the prayer.

Part of the confusion is that announcers frequently get the rule wrong in this situation, saying that a player should miss a free throw on purpose, because “the clock starts when the ball hits the rim”. This is not true. The rule mentions the ball hitting the rim, because it’s a different situation than an airballed free throw, but the clock doesn’t start until the ball is legally touched by a player.

So the fact that the clock isn’t yet running when Jones get the ball isn’t a problem. 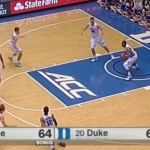 The fact that he’s able to dribble twice and move from inside the charge circle to the free throw line in a tenth of a second is a problem, however. 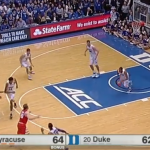 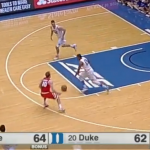 It’s 15 feet from the charge circle to the free throw line. To cover that distance in 0.1 seconds means that Jones was traveling at 102.3 miles per hour, which would be … amazing.

As for the shot itself, there was contact as Jones tried to release it, but it’s tough to fault a referee for not putting Duke at the line with a chance to win the game based on that level of contact. It wasn’t a blatant hack by any means. 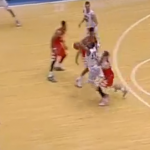 It’s a tough way to lose, but, as Coach K said in his press conference, the game can be cruel. It’s likely that the ending would have been far more controversial had fouls been called on either of those plays.