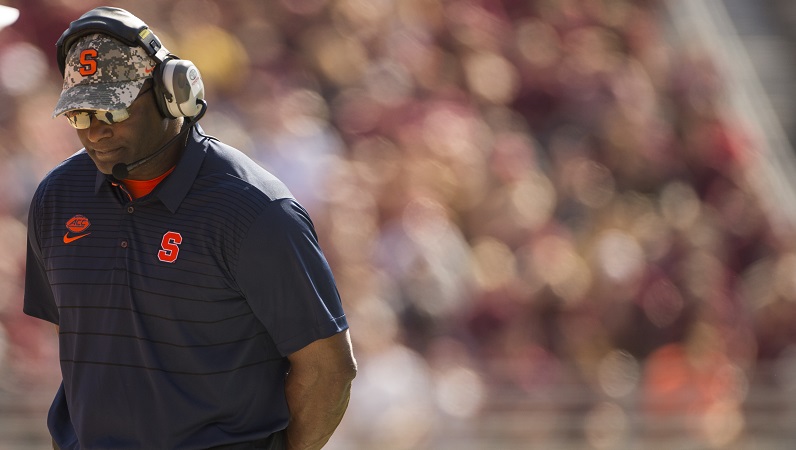 Syracuse missed a golden opportunity to push one step closer to bowl eligibility with a 27-24 loss at Florida State. Lou Groza Award semifinalist Cole Murphy pushed a 43-yard field goal attempt wide left as the clock ran out. The field goal would have given Syracuse a chance to beat the Seminoles in overtime. But in dropping the heartbreaker to FSU, the Orange’s path to a 13th game has gotten complicated.

At 4-5 heading into the final quarter of the regular season, the Orange will have to finish out 2-1. That won’t be easy, as Syracuse finishes up against Wake Forest, Louisville, and Boston College. But if the Orange can manage to win two more regular season contests, they’ll reach a bowl for the first time since 2013. It would be the first bowl of the Dino Babers era, and the second for the Orange since joining the ACC.

Wins against Wake Forest and Boston College might have seemed a cinch for SU after the Orange upset Clemson back in mid-October. But since that time, BC has blown out Louisville, Virginia, and Florida State. The Eagles are playing like one of the best teams in the ACC all of a sudden. Wake Forest went to South Bend and dropped 37 points on Notre Dame, and need only to beat Syracuse Saturday to secure a bowl berth of its own.

But don’t count out the Orange. They’ll face Wake Forest and BC in the Carrier Dome, where the home team is a perfect 5-0 this season. Even the Louisville game can’t be counted as a sure loss. Syracuse has played well on the road this fall, giving LSU, N.C. State, and Miami all tough games on their respective home fields. What makes the upcoming Syracuse games with Wake Forest, Louisville, and BC fun is that all three contests will directly determine who reaches a bowl game among those programs.

The ACC’s bowl landscape is a jungle with three weeks remaining in the regular season. North Carolina is the only school in the league that already knows it won’t be playing in a bowl. Five schools – Clemson, N.C. State, Miami, Virginia Tech, and Virginia – are already bowl eligible.

The ACC’s remaining eight schools, including Syracuse, all have four or five losses. Boston College and Wake Forest need one more win to reach a bowl. Georgia Tech, Pittsburgh, Duke, Louisville, and Syracuse all need at least two more wins.

If Syracuse does manage to attain bowl eligibilty, one attractive possibiilty would be the New Era Pinstripe Bowl, played at Yankee Stadium. Syracuse appeared in the Pinstripe Bowl in 2010 and 2012. Those crowds lagged behind the 2013 game, featuring Notre Dame, and the 2014 game, which featured Penn State. But the attendance at Syracuse’s Pinstripe Bowl appearances in 2010 and 2012 was better than the attendance produced by the two most recent ACC teams to appear in the game, Duke and Pittsburgh.

No fans in attendance for Syracuse Football this fall

Due to the COVID-19 pandemic, Pittsburgh's star All-ACC defensive lineman Jaylen Twyman has decided to…

Starting with Virginia Tech's Caleb Farley, here's a complete list of ACC players that will…