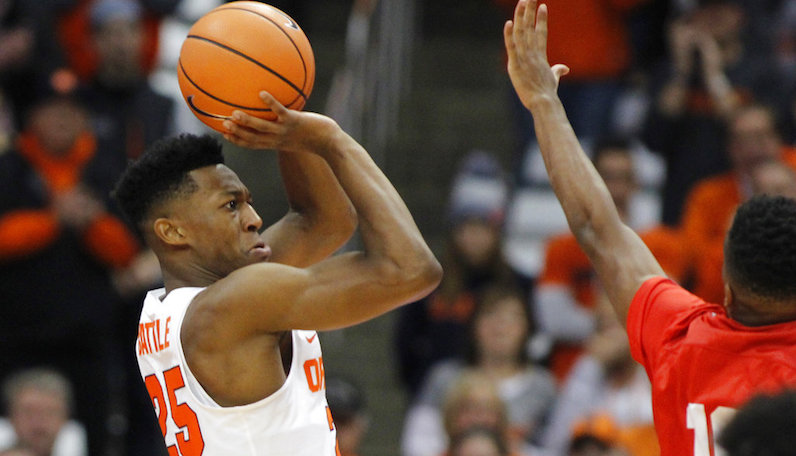 Tyus Battle gave Syracuse a tremendous boost for the 2018-19 season when he announced, just before the NBA Draft underclassman deadline, he’ll be returning. The Orange are now returning all five starters from last season – the first time that’s happened at Syracuse since 1999-2000.

The return of Battle, who averaged 39 minutes per game last season, makes the Orange a legitimate ACC title contender in 2018-19. Coming off a surprise Sweet 16 appearance, the Orange are poised to be a whole lot more than a bubble team next time around.

Battle led the Orange in scoring (19.2 ppg) and made 3-pointers (77), and was second on the team in assists (76) and steals (54). He was also an 83.9 percent free throw shooter. With the decisions by Duke’s Marvin Bagley and Boston College’s Jerome Robinson to head to the NBA, Battle is the ACC’s top returning scorer.

Like Battle, fellow returners Frank Howard, Oshae Brissett, and Paschal Chukwu started all 37 games for the Orange last season. The collective return of this quartet means that Syracuse will return 80.8 percent of its scoring, 95.6 percent of its made 3-pointers, and 59.3 percent of its rebounding in these four players alone.

Syracuse did lose Matthew Moyer, who made 20 starts last season, to a transfer. Moyer is headed to Vanderbilt.

But one of the reasons why Moyer transferred was the emergence of freshman Marek Dolezaj, who started Syracuse’s final 17 games last winter. It was Dolezaj taking the floor during Syracuse’s Sweet 16 run, so he can logically be considered a fifth returning starter for the Orange. Combining Dolezaj’s rebound totals with the other four Syracuse starters, the SU starting lineup retains 72.3 percent of the team’s total rebounding from last season.

The Orange got another boost for next season in Mid-May, when South Carolina prep forward Robert Braswell announced he’d be signing with Syracuse. A two-time South Carolina 5A state champion in the high jump, Braswell will bring additional rebounding ability to the Syracuse rotation. He averaged 16 points and eight rebounds a game as a prep senior, leading Blythewood High School to the state semifinals.

Braswell is unranked as far as the 247Sports Composite, though the 247Sports network individually ranked him a 3-star and the No. 29 power forward in the 2018 class. But the athletic power forward could be a diamond in the rough for Jim Boeheim and company. With his freakish leaping ability, Braswell will have a chance to develop into a key player for the Orange. He won’t be forced into heavy immediate duty with Brissett and Chukwu returning. But Braswell will have an opportunity to work with and learn from those two ACC veterans.

Boeheim likes his compact rotations, not seeing the need to play nine or ten players regularly. While Battle, Brissett, and Howard all averaged over 38 minutes per game last season, only five other Orange players averaged more than 12.4 minutes. Of those eight players, only Geno Thorpe and Moyer won’t be back.

The Orange are looking at an eight to nine-man rotation. with sophomore forward Bourama Sidibe and guard Howard Washington, along with incoming freshmen Braswell and guard Jalen Carey, complimenting the returning starters.

With Braswell on board and Battle coming back, the pieces are in place for Syracuse to make a special run in 2018-19. There’s arguably no other ACC program with as much returning firepower.

Read more: 3 reasons why Oshae Brissett is so valuable to Syracuse Basketball