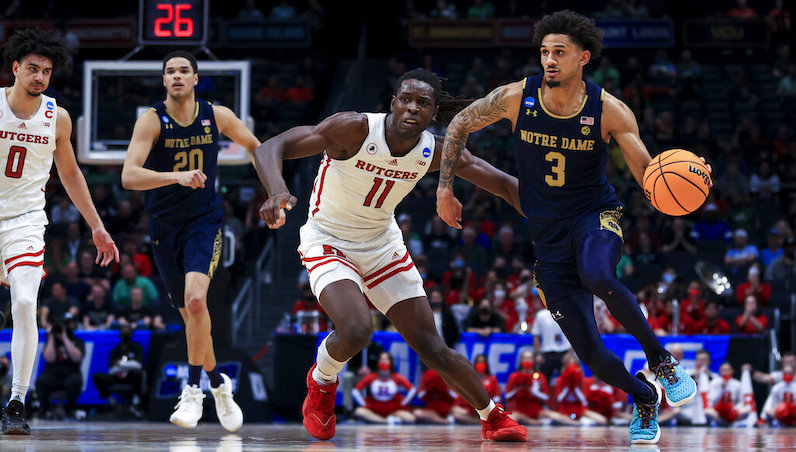 Notre Dame shook off a tough shooting performance from star freshman guard Blake Wesley to defeat Rutgers in a double-overtime thriller, 89-87. It was a phenomenal game, with both teams efficient on offense. At the risk of recency bias, this is a First Four game that’s one to remember.

As usual, Notre Dame mixed in its primary sets on offense — with heavy continuity ball screen usage. This has been Notre Dame’s go-to offense in the 2021-22 season.

Depending on which big man sets the empty-side ball screen, Notre Dame can flow into different post-screen actions. Nate Laszewski, a 6-foot-10 knockdown 3-point shooter, will pop for catch-and-shoot looks.

This will also open the floor for drives to the basket: closeout attacks and live-dribble penetration from Notre Dame’s guards.

When Paul Atkinson Jr. is involved in the action, however, the Irish want to dive him to the basket — where he can look for screen-roll finishes or seal for hi-lo attempts.

Atkinson is also rather adept at these fake dribble-handoff (“Keep”) maneuvers, which serve as another way to get the Yale transfer in the paint.

Now shooting 60.2 percent on 2-point attempt this season, Atkinson finished with a game-high 26 points, while shooting 13-of-15 from inside the arc.

Brey also dialed up some variation of Notre Dame’s Scissor action into Floppy four times in this game. On each possession, Notre Dame either scored or drew a foul.

During this late-game possession, after Floppy, the ball cycles back to veteran point guard Prentiss Hubb. Laszewski seemingly runs up to screen for his teammate of four seasons. Instead, Laszewski slips, which freezes Clifford Omoyuri, and darts to the rim for a finish.

After the game, Notre Dame head coach Mike Brey said that he hoped to celebrate the victory with some Irish whiskey on the plane ride from Dayton to San Diego.

During the game, though, Brey’s drink of choice seemed to be something shaken, not stirred. Notre Dame’s half-court offense scored several timely buckets with the help of “shake” action.

Basically, “shake” refers to an off-ball movement along the perimeter — coming into the vision cone of the pick-and-roll ball handler. In the above clip, as Laszewski screens for Trey Wertz and dives to the rim, his roll holds Paul Mulcahy of Rutgers for half a second. In that split second, Wesley shakes up from the corner, catches the swing pass from Wertz and gets downhill.

It’s a simple concept and something pretty much every team deploys, although Brey’s squad has a little extra oomph in the half court. Notre Dame works with a tight rotation; however, six of the seven players in the every-game lineup have good perimeter skills. Dribble, pass, shoot.

There’s an experience factor, too. Six rotation players are in their fourth season of college basketball. Wesley, the lone exception, projects as a first-round pick in the 2022 NBA Draft.

The upshot: Notre Dame has gobs of skill and chemistry along the perimeter. This team reads and reacts. The guys on this roster also play for a coach in Brey who empowers them to compete with confidence.

According to Synergy Sports, Notre Dame ranks No. 4 nationally in spot-up efficiency: 1.12 points per possession (58.2 eFG%). This doesn’t happen by accident. It’s a combination of system, talent and offensive flow.

Earlier in the First Four game — Notre Dame runs pick-and-roll action out of its Horns alignment. When Atkinson dives, Mulcahy is once again forced to help off the corner. While that happens, Cormac Ryans (16 points, 7-of-12 FGA) shakes up a little bit from the corner, receives a skip pass from Hubb and drains a 3.

Back to the second half: the Irish return to their Floppy action — off the initial scissor cuts. As Wertz exits the single-double action, he sprints directly into a DHO with Laszewski, who slips and dives. Laszewski runs free; now it’s a 2-on-1 read for Wertz — eyeing Ron Harper Jr.

Harper is forced to dig off Dane Goodwin, in the direction of Laszewski. Wertz makes a good read: Goodwin shakes up, catches the outlet and attacks Harper’s closeout for a layup.

Down the stretch, Notre Dame felt comfortable spacing the floor, 4-around-1, and running spread pick-and-roll — with a little shake.

Here’s Hubb-Laszewski pick-and-roll, which Rutgers switches; Harper lands on Hubb. With a speed advantage, Hubb drives right and gets into the paint. Omoruyi glances a Hubb and Goodwin takes advantage. When Omoyuri looks to closeout, it’s too late; Goodwin is now in a different place.

Goodwin shakes left and it’s an obvious pitch-and-catch with Hubb.

Now in double overtime: it’s more shake action from Ryan, who lifts up around the Hubb-Atkinson pick-and-roll. Omoruyi provides help: in fact, he nearly forces a turnover. Instead, Ryan kicks out to Hubb. With the matchups scrambled, Omoruyi is now on Wesley, who (astutely) sprints up from the restricted area to the right wing. Omoruyi (2.7 blocks per 100 possessions) follows, which opens the lane.

Hubb sees this and drives downhill for a bucket.

As much fun as the win in Dayton was for Notre Dame, there’s a quick turnaround. That’s postseason life. Wrapped around a cross-country flight, Notre Dame must get ready for Alabama — one of the premier go-go offenses in college hoops.

Led by Nate Oats, Bama ranks inside the top 15 nationally in both adjusted offensive efficiency and pace (15.5 seconds per offensive possession), according to KenPom.

Alabama has regressed on defense this season: No. 94 in adjusted efficiency. Led by Herb Jones, the 2020-21 edition of the Crimson Tide finished the year No. 3 in defensive efficiency. This is still a formidable team, though.

Given the offenses in this matchup, this has the chance to be a fun, wide-open game. Notre Dame’s offense plays at a slower pace, as is customary under Brey: 18.2 seconds per possession (No. 261). This still projects as a high-scoring contest — with tight margins.