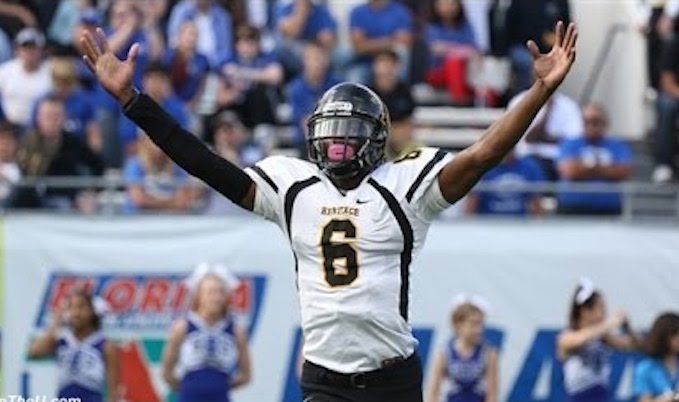 ance to land Torrance Gibson (YouTube)
Miami is getting a second chance to land 4-star quarterback Torrance Gibson. Based on ACCSports.com film review, here’s a look at what the Canes will be getting if they succeed in flipping him.

Torrance Gibson (6-4, 204, Fort Lauderdale, Florida) is a 4-star quarterback for American Heritage High who committed to Ohio State in November. He’s still up in the air, however, and Miami is one of several schools trying to flip him.

Whether the Canes flip him or he ends up somewhere else, Gibson will be a dual-threat quarterback at the college level who may be most dangerous right when a defense thinks they’ve got him cornered.

In a mid-October game at Apopka, Gibson broke four tackles, dropping back 16 yards behind the line of scrimmage as he ranged back and forth across the field before eventually breaking free up the sideline for an eight-yard gain. He was able to power through the first tackler, make two others miss by simply outrunning their diving tackle attempts, and juking a third with a sudden stop and change of direction.

In a home game later in the year, Gibson channelled Johnny Manziel, taking the snap at the 50 yard line, twisting out of a tackler’s grasp at his own 41, then dropping back as far as his own 35 to evade other tacklers. While on a full run and meeting a tackler head on, Gibson released the ball, finding a receiver on the far sideline for a 14-yard gain.

Gibson isn’t only effective when improvising, however. When he calls his own number for a running play, he could double for an elite running back. His preferred run play is to play fake a handoff on a jet sweep, then tuck and burst forward through the line. More often than not, he adds a quick change of direction to work around any linebackers sniffing out the fake, and then jets down the sideline.

Unlike many running quarterbacks, Gibson isn’t using his feet to make up for deficiencies in classic quarterbacking skills. The southpaw can throw the deep ball with deadly accuracy, and can also laser a fastball through double coverage to find a receiver in stride.

In a season opening win over Dwyer, he sent a ball 60 yards in the air to hit Miami commit Dredrick Snelson in stride for a 72-yard touchdown. In the same game, he set up Snelson for a 65-yard score by rifling the ball through coverage for a short gain, putting Snelson in position to make a move and break free. Gibson also added a touchdown on a jump screen pass.

Losing Gibson to Ohio State in the fall was a big blow to Miami’s class of 2015. If the Canes are able to get him back at the last minute, it could be the big-play game changer the Canes need to reach the ACC title game for the first time in their history.