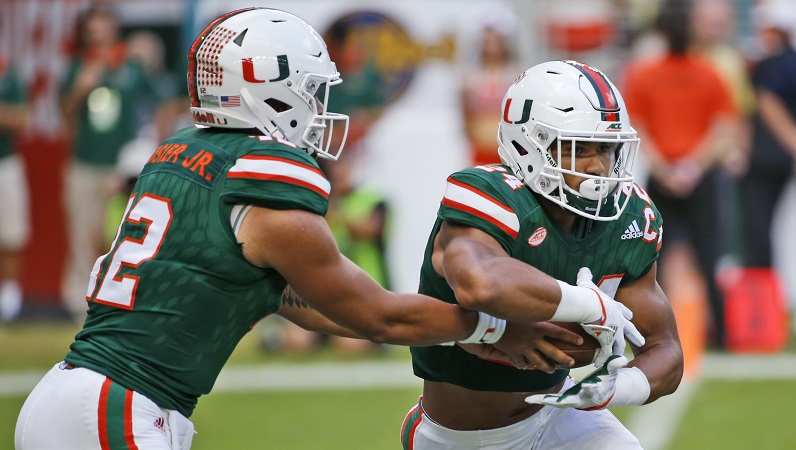 Miami quarterback Malik Rosier (12) hands off to running back Travis Homer (24) during the first half of an NCAA College football game against Georgia Tech, Saturday, Oct. 14, 2017 in Miami Gardens, Fla. (AP Photo/Wilfredo Lee)

Mark Walton was, as his coaches liked to say, an excellent football player.

Or is, anyway. He still is. He’s just hurt, and won’t be able to use his varied set of skills to help Miami going forward.

Walton, who busted his ankle and will be out the rest of the season, was Miami’s best all-around player. He was one of the better running backs in program history, which is no small honor. He was a skilled pass-protector. He was an excellent receiver, able to make spectacular one-handed grabs or catch a pass in traffic and turn upfield for big yardage.

Not only did Walton – 1,117 yards and 14 touchdowns last year, and headed toward another 1,000-yard season this year before his injury – make Miami’s ground game one of the best in the country, his ability as a receiver meant a defender had to mark him, or surrender a big play. When Rosier dropped back to pass, the 5-9, 205-pound back was powerful enough to keep most blitzing linebackers and defensive backs at bay while the quarterback operated.
If that wasn’t enough, Walton also covered punts and kicks, eager to get there first and make a tackle.

So now the Hurricanes turn to Travis Homer, a sophomore who has looked good in limited action, to carry the bulk of Walton’s workload. He is fast and a tough runner, but if he has the intangibles Walton brought, we have yet to see them. That’s not to say they aren’t there. He’s just taking over for a guy who chased off two running backs, would-be seniors Joe Yearby and Gus Edwards, who left the program after Walton eroded their playing time.

If Homer steps in and turns first-and-10s into second-and-3s with regularity, then Miami won’t miss a beat. But he’s probably going to be tired, at the very least, as he learns how tough it is to be a bell-cow back in the ACC. Walton was used to it. Homer could have some up-and-down games as he learns the craft.

The lessened threat of the run could squeeze Rosier, who has been accurate and has made limited mistakes so far. With Walton hobbled in the first half against Florida State last week, Miami scored zero points in the first half. The Seminoles took away Walton and forced Rosier to beat them, and he couldn’t – mostly because his receivers weren’t open. Miami adjusted and wore down the Noles in the second half, and pulled out a win. That may be the post-Walton recipe for the Hurricanes, who still hope to challenge for the ACC Coastal without their best player. It will not be easy. Homer and Rosier must be worlds better for the Canes to remain unbeaten.

Read more: On field momentum not translating to Miami recruiting?