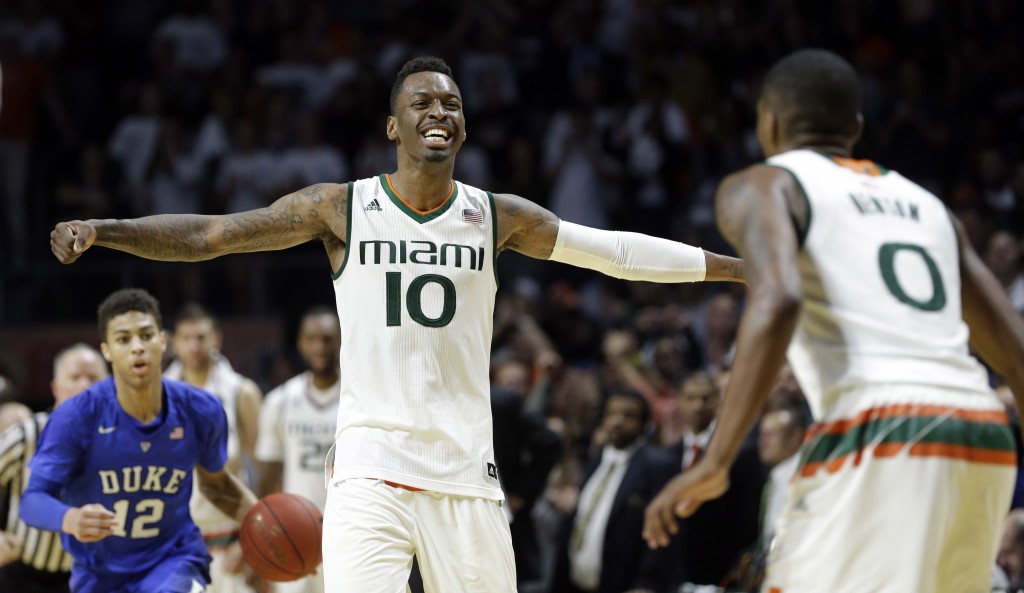 A dapper A-Rod was in the house when Miami played host to Duke Monday.

But it was another A-Rod who was the star of the night.

Point guard Angel Rodriguez had a double-double as the Hurricanes again won by double digits, this time 80-69 over the Blue Devils.

Rodriguez had 11 assists to go with his three 3-pointers and 13 points. He played so unselfishly that making winning passes became contagious among his teammates.

With the Hurricanes protecting their lead, center Tonye Jekiri made such two great back-door passes that he had his team looking like Princeton.

Of Miami’s 30 baskets, 24 came on assists. It also had just seven turnovers.

That’s why it had its 15th victory by 10 points or more and why coach Jim Larranaga is 4-2 against Duke coach Mike Krzyzewski.

The Hurricanes are superior to the Blue Devils right now and both teams know it.

Larranaga’s pre-game talk with his players was nothing special or memorable like he’s been in the past.

After the game Krzyzewski simply said, “They’re better than we are.”

Larranaga liked his defensive matchups man-to-man; and when Duke went man-to-man in the final minutes, Miami scored on its final eight possessions.

“As soon as they came out of their zone, we executed and just spaced them out,” Rodriguez said.
It makes sense. Devils can’t flourish and cause havoc when there’s an Angel around.

From the opening possession – when he hit Sheldon McClellan for an alley-oop dunk – Rodriguez was on.
He hit a couple of shots early. Then he became surgical.

Facing zones with little pressure, Rodriguez picked Duke apart like Tom Brady does to everyone not named the Denver Broncos. He had assists with both hands, wrap-arounds, no-look passes, bounce passes and more alley oops.

“We were very focused and very hungry,” Rodriguez said. “We played with a lot of confidence.”
Larranaga said Rodriguez was sensational.

“Angel and our entire team are much better when we’re able to get into the open court and make plays,” he said. “It’s not ‘run an offense,’ it’s play together, find the open man and score – whether you’re using a ball screen to beat your man and find an open man or against their zone. What we did so well midway through the first half was get it into the middle of the zone, then kick it out or shoot it.”

ESPN analyst Seth Greenberg said the better teams right now in the country are those with more experience, noting the top scoring, defensive and rebounding teams are those who are junior and senior dominated.

That’s what Rodriguez and most of his teammates are.

Question is, can Miami’s point guard maintain his consistency, particulary when the pace slows down and with his shooting?

Rodriguez came into Monday’s game 4 for 30 from 3-point range in ACC games.

That’s now a memory. If he can level his play, the Hurricanes are a Sweet 16 team, no question.

And when he’s playing like he did Monday night against Duke, Miami is a serious challenger for the national championship.