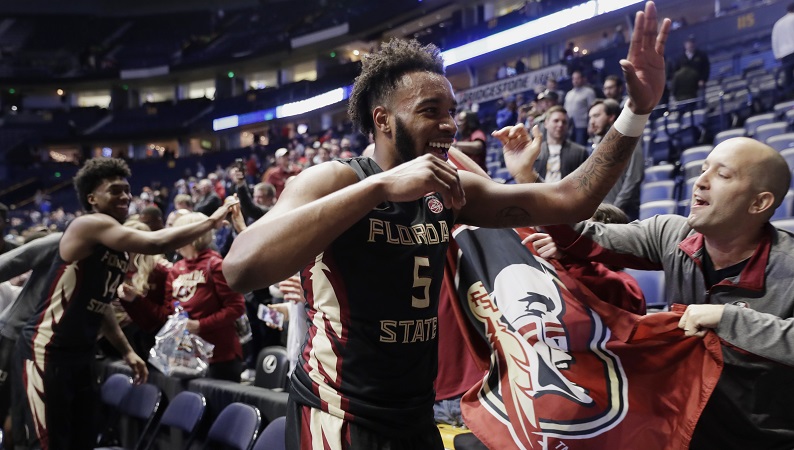 For the first time in seven years, Florida State finds itself in the Sweet 16. The Seminoles did the unthinkable in Nashville by closing the game on an 18-4 run to knock off top-seeded Xavier in the second round on Sunday night.

Now at stake is a first trip to the Elite Eight in 25 years. The ninth-seeded Seminoles will be out in Los Angeles tonight to take fourth-seeded Gonzaga, who is coming off a run to the national championship a season ago.

How they stack up

FSU’s Leonard Hamilton has been lauded for his recruiting prowess and there’s certainly truth to that as the Seminoles have finished with a top 25 class three times in the last four cycles. For Gonzaga, there is this notion that head coach Mark Few does less with more, but judging from the 247Sports Composite rankings, that’s not necessarily true.

Listed above is where the starters rank and match-up-wise, the Bulldogs have the advantage in four of the five positions. All five starters for the Bulldogs ranked in the top 250 for their respective classes. Johnathan Williams, the leading scorer and rebounder for Gonzaga, is a Missouri transfer.

While there is plenty of talent across the board, the area where the Seminoles may have the biggest advantage on Thursday night is depth. Gonzaga has seven players who average at least 10 minutes per game while the Seminoles have 10.

Bang off the bench

While recruiting rankings don’t mean much once players arrive on campus, it is worth noting that FSU’s best two recruits are currently coming off the bench. Freshman MJ Walker was the highest ranked recruit for either team, coming in as a top 30 national prospect this season. The second-highest recruit for FSU is Trent Forrest, who was ranked 70th overall in 2016.

While Walker has struggled mightily of late, Forrest has been arguably the Seminoles’ best player since the start of February. In two tournament games, Forrest is averaging 12 points, 5.5 rebounds, 5.5 assists and 3.5 steals. When it comes to the guard position, FSU is also very deep, which could pose a problem for Gonzaga, which is thin in the backcourt.

As far as talent goes, it’s fair to say that the two teams are fairly even across the board. Most would give the coaching edge to Gonzaga with Few. All the other intangibles also seem to favor the Bulldogs as they’ll be closer to home, more rested and more accustomed to playing on the big stage.

For his FSU career however, Hamilton is 6-5 in the NCAA Tournament, but as the lower seed, he’s 4-1. The lone loss came to Gonzaga in the first round of the 2010 tournament.

Read more: Can Trent Forrest and PJ Savoy keep it going for FSU against Gonzaga?