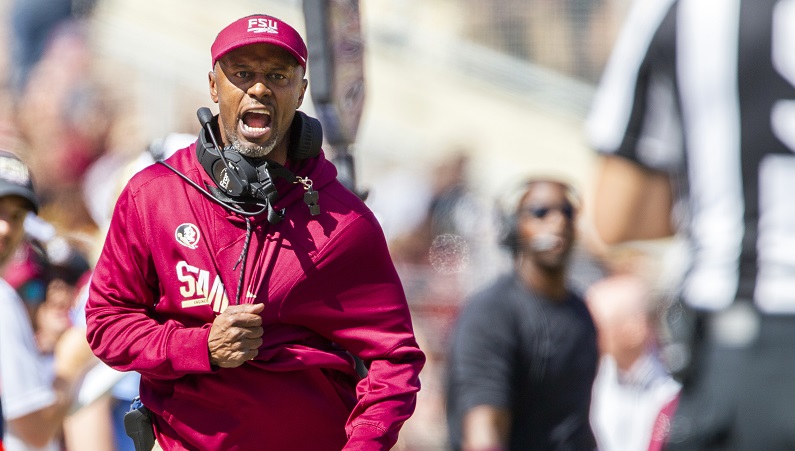 Florida State head coach Willie Taggart disagrees with the referee during the first half of an NCAA college football game against Clemson in Tallahassee, Fla. Taggart's Seminoles are coming off a blowout home loss to No. 2 Clemson as they visit North Carolina State in Saturday. (AP Photo/Mark Wallheiser, File)

Ronald Reagan had been in office less than one year. Olivia Newton John’s “Physical” was the No. 1 song on the Billboard Music Chart.

That’s what was going on the last time Florida State football failed to play in a bowl game. Although it is not officially recognized by the NCAA, the Seminoles have the nation’s longest bowl streak at 36 years. Keeping in intact however, looks like a tall task.

Each of FSU’s three remaining opponents are currently ranked in the College Football Playoff rankings. For the Seminoles, who sit at 4-5 on the year, to make a bowl, they will need to beat two of them. That begins on Saturday in South Bend against No. 4 Notre Dame.

Just barely getting in

Florida State has had some close calls in the past. Last season, FSU needed to win its final three games and reschedule a contest with Louisiana Monroe to become bowl-eligible. In 2009, the Seminoles had to win four of their final six regular season games after a 2-4 start to reach bowl-eligibility.

The fan base is slowly coming to the realization that this is more of a rebuilding effort than initially thought for first-year head coach Willie Taggart. The offensive line has been a disaster since the Labor Day opener against Virginia Tech.

These murmurs aren’t dissimilar to what was heard after a disappointing 3-6 start last season under Jimbo Fisher. While fans will concede that the Seminoles weren’t nearly as close to becoming a player on the national scene as expected in the offseason, the bowl streak still means something.

As much goodwill as Taggart built up prior to the same by embracing FSU’s tradition-rich past, being the guy who allowed the bowl streak to end would be a stigma that stuck with Taggart into next season. Failing to achieve bowl-eligibility would also mean that the Seminoles would lose bowl practices, which are significant to further develop young talent. It’s also worth noting that FSU hasn’t had a losing season since 1976.

Adding to the importance of finishing strong for Taggart is that his now biggest rival is also under a first-year head coach. While FSU has struggled this season, rival Florida has made a resurgence under first-year head coach Dan Mullen. The Gators were recently ranked in the top 10 and have already reached bowl-eligibility after just a 4-7 campaign last season and are responsible for handing No. 3 LSU its only loss of the year.

Bowl-eligibility could come down to the annual rivalry meeting that takes place this year in Tallahassee. The Seminoles have won five straight over their rivals and that’s another streak that fans desperately want to see survive. Other contests are at No. 4 Notre Dame and at home against No. 22 Boston College.

Despite the struggles through the early parts of the season, Taggart could rebuild a lot of goodwill by beating rival Florida. Unless next season is also a disaster, Taggart will likely get three years to turn FSU into a winner.

For the first-year head man however, bowl-eligibility is probably a good minimum threshold to head into 2019 with position momentum. Florida State will need to win two games against currently ranked teams to make that happen. FSU hasn’t defeated a ranked team since topping Michigan in the Orange Bowl to end the 2016 campaign. For a guy like Taggart who has embraced Florida State’s traditions, he doesn’t want the bowl streak to end on his watch.

Read more: Behind the offensive line woes at Florida State