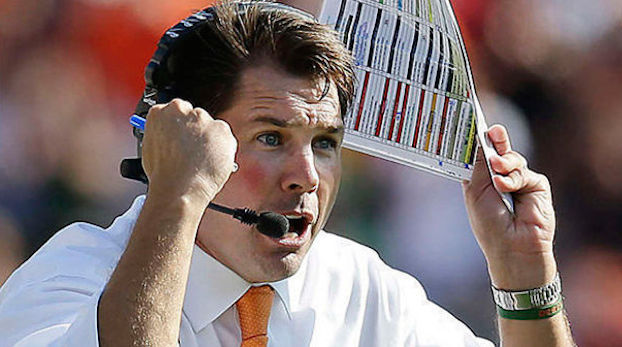 Which ACC coaches are safest, and who has the hottest seat? We rank them

We received an email from one of our members, Jason in Orlando, who had a question for ACC Sports Journal staff. If you would like our writers to answer your question or address an issue you think we’ve missed, drop us a line at mailbag@accsports.com

Which ACC football coaches are most likely to lose their jobs this season (Please say Al Golden) and whose jobs are the safest?

Thanks for writing. And we have some good news for you, and several other Hurricanes fans: Al Golden is firmly on the hot seat this season. Here’s our bottom five ACC football coaches, based on their job security.

15. Al Golden, Miami: A vocal contingent of Miami fans have seen enough. More troubling, so have a vocal contingent of former players. Golden has a large recruiting class for 2016, but he’ll need to produce on the field and keep the recruits from defecting in order to last another year.

14. Mike London, Virginia: Since winning ACC Coach of the Year in 2011, London has won 11 of 36 games. He’s 5 and 19 in ACC games and has won three games against Coastal Division foes and has never beaten Virginia Tech. London has managed to bring in high-profile recruits, but he needs to produce wins.

13. Scott Shafer, Syracuse: He had a rough 2014 after losing his starting quarterback, and his backup. Still, a five-game losing streak to end the year, and losses in nine of the last 10 have him on notice. His prickly personality–he cussed out Dabo Swinney for not taking a knee…at halftime, and compared a loss to “ISIS out there cutting people’s heads off,” could remove some of his margin for error.

12. Larry Fedora, North Carolina: Fedora has beaten NC State twice and beat Duke last season. Still, UNC has seen its win total drop each year of his tenure, and he has a former college coach Gene Chizek, on his staff, who could easily step in, if the school cuts bait.

11. Frank Beamer, Virginia Tech: Beamer isn’t going to get fired, but as the Hokies have suffered through three un-Beamer-like mediocre seasons, he could be … encouraged … to retire.