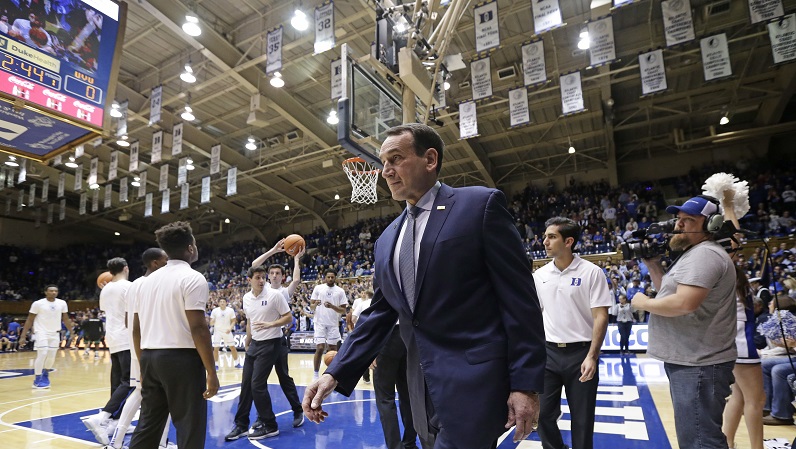 On the afternoon of Sunday, Nov. 30, 1980, Mike Krzyewski won his first game at Duke University, defeating Stetson, 67-49. Jimmy Carter was still in the White House at that time, though President-elect Ronald Reagan was actively planning his succession. A little over a week later, on Dec. 8, 1980, John Lennon would be shot dead in front of his New York City apartment.

Duke’s victory that long-ago Sunday in Cameron Indoor Stadium over Stetson got minimal press attention. Few could have imagined then that less than 37 years later, on Nov. 11, 2017, Krzyzewski would win his 1,000th game with the Blue Devils with a win over Utah Valley.

The numbers are staggering. Krzyzewski is one of just three active Division I coaches with more than 800 wins. The others are Roy Williams of UNC, and Jim Boeheim of Syracuse.

With Rick Pitino now out of coaching, there are only five active Division I coaches with 700 wins. Along with Krzyzewski, Williams, and Boeheim, West Virginia’s Bob Huggins and Coastal Carolina’s Cliff Ellis also make that particular list. But only Krzyzewski and Boeheim have won the overwhelming majority of their games at one school.

There is only one man in the history of college basketball – Harry Statham of McKendree University in Lebanon, Illinois – who has more victories than Krzyzewski at one school. Statham, who has coached at McKendree since 1967, has more than 1,100 victories as a college coach. But Statham has won all those games in relative obscurity, coaching at the NAIA level.

Although Coach K has a peer in Statham in terms of total victories among smaller-college coaches, nobody approaches Krzyzewski in Division I. The next-closest coach in terms of major college victories to Coach K is his ACC rival, Jim Boeheim.

With Krzyzewski showing no signs of slowing down at age 70, and Harry Statham turning 80 this year, the Duke head coach still has time to become the winningest coach ever at any level of men’s college basketball. Later this season, Krzyzewski could also pass the late Pat Summitt to become the all-time winningest Division I coach in either men’s or women’s basketball.

Statham and Summitt’s records are the only remaining existing challenges to Coach K. If Krzyzewski surpasses Statham and Summit, he can stake claim to the title as the undisputed winningest coach in college basketball anywhere, at any level, with either gender.