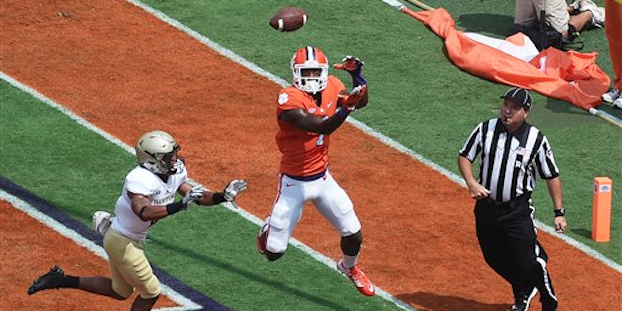 Clemson’s offense took a hit on Saturday when wide receiver Mike Williams was carted off the field in the first quarter of the Tigers’ game against Wofford. Williams didn’t return to the game, but on Sunday, Dabo Swinney told reporters that the junior suffered a small neck fracture.

The injury occurred after Williams caught a four-yard touchdown pass and collided with the padding on the goal post. It’s unclear whether or not he will return to the field this season, but the injury is not expected to be career-ending.

“Mike is doing well,” Swinney said. “He can walk and will be at class tomorrow.  He will wear a brace and will be reevaluated again in about six weeks.

“I can’t say how long he will be out. He might not be able to play the rest of this year. We will just have to see how it heals.”

As a sophomore, Williams earned second-team All-ACC honors after catching 57 passes for 1,030 yards and six touchdowns. He finished Saturday with two catches for 20 yards and one score.

Clemson has a variety of receivers who could step up in Williams’ absence. Senior Charone Peake and junior Germone Hopper could see more targets. True freshman Ray-Ray McCloud led the team in receptions against the Terriers with eight catches for 80 yards, while fellow freshman Deon Cain chipped in with three grabs for 36 yards.

“Mike is hard to replace because of his experience and his talent,” Swinney stated. “But we cross-train receivers, and it will give other talented players an opportunity.”