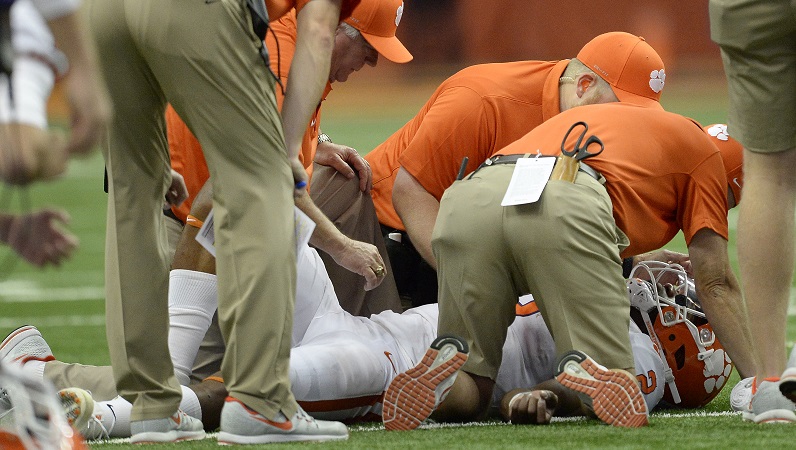 Clemson quarterback Kelly Bryant (2) is tended to by trainers during the first half of an NCAA college football game, Friday, Oct. 13, 2017, in Syracuse, N.Y. Bryant was down for a while and taken to the locker room in the final minute of the half. (AP Photo/Adrian Kraus)

Clemson fans held their collective breath during the third quarter of the Tigers’ 28-14 victory over Wake Forest in Winston-Salem Oct. 7. Starting quarterback Kelly Bryant, who has so effectively stepped in for Deshaun Watson and kept Clemson winning, walked off the field gingerly and didn’t return that afternoon. After limping his way through much of the first half in Clemson’s stunning loss at Syracuse in the Carrier Dome, Bryant was again knocked out of the game in the second quarter with a concussion.

Redshirt freshman Zerrick Cooper got the nod when Bryant went down and played reasonably well, completing 10 of 14 passes for 88 yards. Though he didn’t throw a touchdown pass, Cooper didn’t make any huge mistakes either. The Tigers suffered a 27-24 loss to the Orange. But it was due more to Syracuse’s speedy offense, which confused Clemson’s star-studded defense, than any offensive deficiencies brought about by Cooper.

The Tigers have a bye week before they return to action against Georgia Tech on Oct. 28. Between now and then, Clemson has to find an answer if they’re to get back on track for another ACC title, and get back into the conversation for the College Football Playoff.

Cooper proved his worth under difficult circumstances against Syracuse. But he knows that he’s got an elite quarterback waiting in the wings behind him, and can’t afford for one second to be complacent. Hunter Johnson, a former 5-star recruit out of Indiana, has completed 11 of 12 passes so far this season as a backup for Clemson. That includes a perfect five-for-five for 42 yards and a touchdown in the win over Wake Forest.

For the early part of the season, the Tigers were able to platoon Cooper and Johnson as Bryant’s top two backups. When push came to shove, however, and Bryant had to leave for the second straight game, the Tigers hitched their wagon to Cooper.

For the moment at least, Cooper has earned the right to be considered Bryant’s primary backup, and the likely starter if Bryant can’t go against Georgia Tech. But despite Cooper’s athleticism and ability, Johnson is a unique quarterback talent. The true freshman has the touch and arm strength of an NFL quarterback. And as time goes on, he’s going to continue pushing for game action.

Clemson is in a uniquely good position at quarterback – a position that any coach in America would envy. If Bryant goes down for an extended period of time, the Tigers have guys who could start anywhere else in the ACC at their disposal. While they may be licking their wounds coming off the Syracuse loss, quarterback is by no means the biggest problem for the Tigers at the moment.

Read more: Clemson’s defensive line in a league of their own… kind of