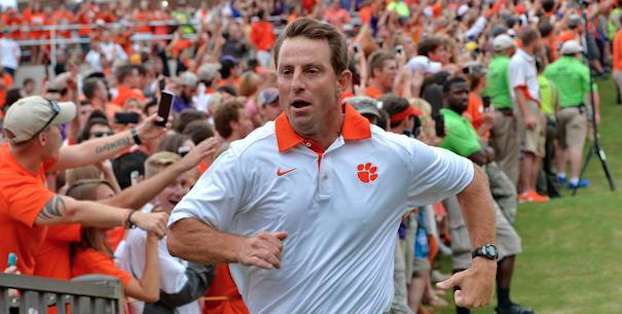 Clemson added a seventh member to its 2017 recruiting class on Sunday when junior wide receiver Amari Rodgers committed to the Tigers. The 5-10, 195-pound standout made the announcement on social media.

In landing Rodgers, the Tigers beat out several major programs, including two that had unique ties to the wideout. A native of Knoxville, Tennessee, Rodgers was a major target for the in-state Volunteers, while his father, former Tennessee quarterback Tee Martin, is the offensive coordinator and wide receivers coach at USC.

Rodgers originally committed to the Trojans in June 2015 but reopened his recruitment in December. Just two weeks before his Sunday decision, he visited Clemson for junior day.

Rated a 4-star recruit and the No. 34 receiver in his class according to 247Sports’ composite rankings, Rodgers is just the latest highly touted wideout to pledge to the Tigers. In the 2016 cycle, Dabo Swinney and his staff signed three 4-star wide receivers, and their 2015 signees at the position included a 5-star and a 4-star.