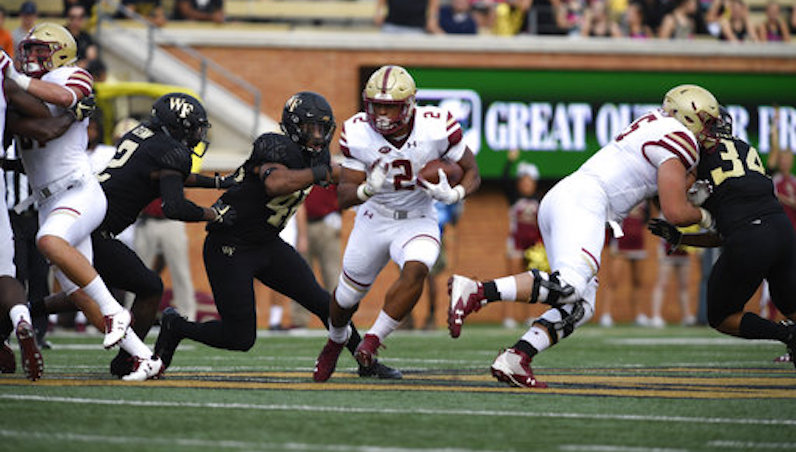 As was expected of him, Boston College sophomore running back A.J. Dillon put up some monster numbers through the end of September.

149 yards and three touchdowns in only six carries against an overmatched Holy Cross squad.

33 carries for 185 yards and a touchdown in a big win at Wake Forest.

161 yards on 28 carries and two more scores in a home win over Temple. At that point, Dillon appeared on pace not only for another 1,000 yard season, but a potential shot at surpassing 1,500 yards for the second straight year.

But it was against the Owls, back on Sept. 29, that Dillon suffered an ankle injury that has sidelined him for the past two games. Dillon was unavailable for BC’s hard-fought 28-23 loss at NC State, and he also didn’t appear in the Eagles’ 38-20 triumph over Louisville. Dillon will have had almost a month off from game action by the time BC straps it on again for a Friday night home encounter with Miami on Oct. 26.

Some might have thought that Boston College’s offense would fall apart without its All-American candidate in the offensive backfield. But they would have thought wrong.

The Eagles went into Raleigh and scored the most points a team has scored against the Wolfpack in Carter-Finley Stadium since Clemson dropped 38 points last November. Then BC scored 38 points in a home victory Oct. 13 against Louisville, improving to 5-2 and substantially increasing the likelihood of a fifth winning season in six years.

BC’s offensive sustainment without Dillon can be attributed primarily to three factors – a veteran offensive line, offensive efficiency, and the emergence of Ben Glines as Dillon’s replacement.

The Eagles knew they were going to have a stout running game this fall, and not just because of Dillon. Returning the entire starting offensive line from the start of the 2017 season – tackles Ben Petrula and Aaron Monteiro, guards Sam Schmal and Chris Lindstrom, and center Jon Baker – gives BC’s offense an advantage that few schools can match.

Baker missed almost the entire 2017 season after suffering a knee injury in the season opener. But he’s been playing like an All-ACC candidate at center throughout September and October.

Heading into the season, BC’s five starting offensive lineman had a combined 116 starts. They’ve stayed healthy throughout the first half of this season, providing any back running behind them a stable group of cohesive veterans to rely on.

Boston College, as throughout Steve Addazio’s tenure, has proven to be a disciplined team throughout the first half of 2018. The Eagles lead the ACC in offensive efficiency through seven games, while quarterback Anthony Brown ranks fourth in the league – behind only Clemson’s Trevor Lawrence, Duke’s Daniel Jones, and NC State’s Ryan Finley – with a 150.4 quarterback efficiency rating.

Though he ranks ninth in the ACC in completion percentage (58.7 percent), Brown has thrown 14 touchdowns, with only four interceptions. Brown’s ability to make plays and avoid bundles of mistakes has kept the Eagles competitive in every game they’ve played, with exception of a 30-13 loss at Purdue.

Like Dillon, Ben Glines had a day to remember against Temple, rushing for 120 yards on 23 carries with a touchdown. Much of the work was done in garbage time, after Dillon had gotten injured. But it proved to be the first hint that Glines could step in and get the job done.

Glines entered the starting lineup for BC in place of Dillon against the Wolfpack, and the responded with another solid performance. Glines picked up 90 rushing yards on 16 carries – a healthy 5.6 cards per carry – while scoring twice. He added another 107 yards and a third touchdown in three weeks in the win over Louisville.

Glines, a fourth-year junior, only had two carries over his first two seasons in an Eagles uniform in 2016 and 2017. But he’s proven that it was worth the wait.

If Glines can continue to perform, the Eagles should remain competitive, even if they don’t have Dillon. But if the Eagles can get Dillon back for Miami, they’ll be in good position to give the Canes a real challenge.