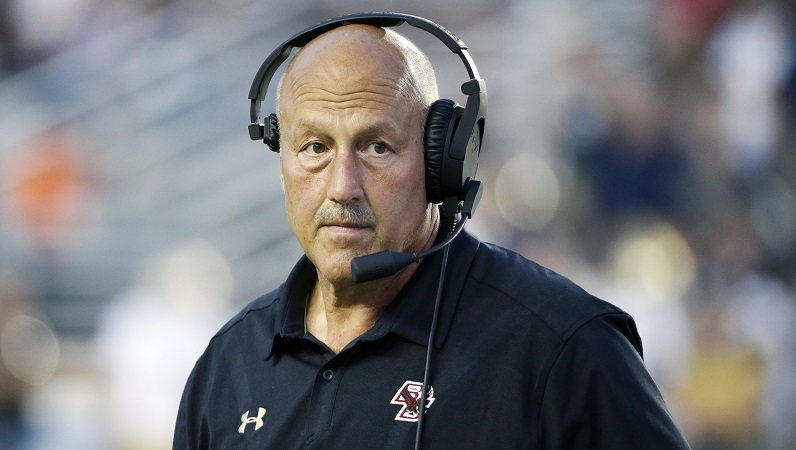 Boston College football head coach Steve Addazio announced new titles for Scot Loeffler and Anthony Campanile on the coaching staff. Loeffler has been elevated to Deputy Head Coach Offense/Offensive Coordinator and will continue to coach the quarterbacks while Campanile has been promoted to co-defensive coordinator in addition to serving as the secondary coach for the Eagles.

“I’m thrilled to announce the new titles for two well-deserving coaches in Scot and Anthony,” said Addazio. “Both men have been vital to our success as a program.”

Loeffler’s new title as Deputy Head Coach Offense/Offensive Coordinator comes on the heels of an offensive turnaround for the Eagles in 2017. BC finished with the ACC Rookie of the Year in true freshman tailback AJ Dillon, who rushed for 1,589 yards, seventh nationally en route to Freshman All-America honors. Over the last six regular season games, BC averaged 36 points per game and outscored the opposition by 19 points per contest including wins over Florida State (35-3), at Louisville (45-42) and at Virginia (41-10).

Campanile has been elevated to co-defensive coordinator after being named the National Defensive Backs Coach of the Year in 2017 by both 247Sports and FootballScoop.com. Campanile, in his third year on the staff at Boston College, oversaw a BC secondary that ranked among the national leaders in several different categories and featured Walter Camp Football Foundation Second-Team All-American Lukas Denis in 2017.

The BC secondary was a key part in BC’s third-ranked pass efficiency defense nationally.
BC finished the season ranked 32nd nationally in passing defense but, per PFF College’s aggregated metrics, was actually one of the top units in the nation in passing defense.