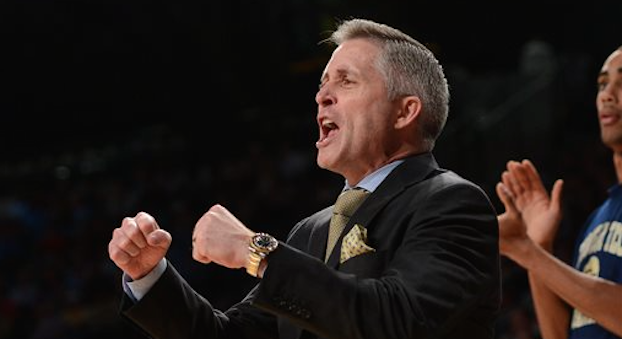 College basketball season is here, and we’re taking your questions for all things ACC basketball.

Jason in Orlando asks: Which ACC coach has to worry about his job security the most this season?

This was an easier question to answer a couple months ago, but with all the off-the-court issues at Louisville right now, it’s a little trickier. Obviously there’s a lot of uncertainty with the scandal the Cardinals are dealing with, so without jumping to conclusions, it’s worth noting that Rick Pitino is a guy to keep an eye on.

As far as coaches who have something to prove performance-wise, Brian Gregory is the first guy who comes to mind. Georgia Tech is in the middle of its longest NCAA tournament drought since the ‘80s, and if not for the fact that the Yellow Jackets are paying Paul Hewitt through 2019 (!!!), Gregory may have lost his job last year.

Gregory’s teams have posted three losing seasons in four years, finishing 12-19 in 2014-15. Most of the losses from last season were by seven or fewer points, so it’s not like the Jackets are that far off from being competitive, but it’s hard to imagine Gregory keeping his job if Tech doesn’t improve its record significantly this winter. With some pretty good senior transfers on the roster, Georgia Tech really could take a step forward.

Another coach to keep in mind is Jim Christian at Boston College. It’s rare for a coach to get forced out after two years, but it’s not unheard of. James Jones only got two years at Virginia Tech. A little over a decade ago, Matt Doherty was out after three seasons at UNC. The Eagles are coming off a 13-19 season and may be even worse this year. It’s unlikely, but you can’t completely rule out Christian being on the hot seat.

Donald in Raleigh asks: If North Carolina’s NCAA issues are resolved and the Tar Heels make a Final Four run, will they return to recruiting glory in the near future?

A Final Four run never hurts, but the issues UNC is dealing with on the recruiting trail extend well beyond on-court performance and even beyond the ongoing NCAA investigation. In the last couple years, the Tar Heels have lost out to California, NC State and South Carolina on some of their priority recruits, so the program’s Final Four drought certainly isn’t the primary factor behind why UNC hasn’t been able to basically pick and choose its future players.

The NCAA situation has turned off some prospects, but Roy Williams has stated there’s more negativity that he and his coaching staff have had to combat. The perception that Williams “puts handcuffs” on his players and convinces them to stay in school rather than leave early for the pros has hurt recruiting to a certain extent (Williams is quick to point out that UNC puts more players in the NBA early than just about any other program in the country). Ironically, the most effective way to fight that and to attract elite-level talent is to make your best players lottery picks as quickly as possible.

So, to really answer your question, I think it would definitely help UNC’s recruiting if Justin Jackson has a huge year and becomes a lottery pick. It also wouldn’t hurt if guys like Marcus Paige, Brice Johnson or even Kennedy meeks are taken in the first round of the 2016 NBA Draft. Of course, a Final Four run would only increase the chances of all that happening. The important thing to remember is that, in today’s era, most top-10 prospects (you could probably even say most top-20 prospects) don’t expect to stay in school for more than a year or two. If they see your program as one that will maximize their chances of getting to the next level quickly, then it’s more likely they’ll sign with your school.

Terrence in Richmond asks: Who is one player left off the preseason All-ACC team that will have a big year?

I was pretty surprised to see Louisville guard Damion Lee left off both preseason All-ACC teams. Maybe it’s because the Cardinals as a team are flying under the radar, and maybe it’s because Lee is a graduate transfer who spent the last few years at Drexel. As a junior last year, Lee averaged 21.4 points and 6.1 rebounds per game, so it wouldn’t be surprising to see him do big things even in the ACC.

Not only did Lee arive at Louisville as an experienced player, but he fills an area of need. The Cardinals lost a lot on the wing following the departures of Terry Rozier and Wayne Blackshear, but Lee will have an opportunity to play a major role. The 6-6, 210-pound guard drew rave reviews from Rick Pitino as early as this summer when he stated that Lee and fellow transfer Terrell Lewis had already locked up starting spots. In Louisville’s last exhibition game against Kentucky Wesleyan, Lee scored 19 points and pulled down four boards.

Another player who isn’t getting the hype he deserves is Sheldon McClellan of Miami. McClellan is the best player on a very good Hurricanes team, and I expect him to easily be one of the top 10 players in the league this season.