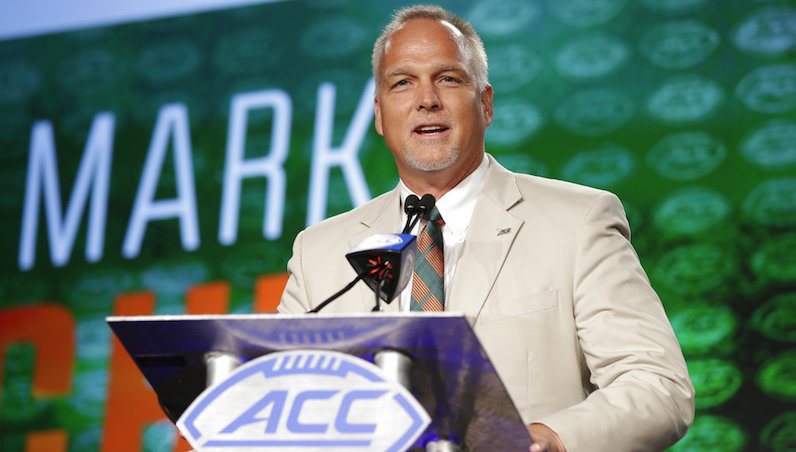 Whenever the Hurricanes visit the heart of ACC country for a game or media event, there’s always pointed jabs about swagger and stuff you’d see on “The U” documentaries. Those used to watching ACC football for decades seem to have determined that Miami, thought to be a Category 5 storm when it joined the league in 2004, isn’t much more than a heavy rain.

There are doubters, you see.

Like one hard-boiled Triangle-area reporter, who spent several minutes in front of sophomore linebacker Shaq Quarterman at the ACC Kickoff pressing him on why he thought Miami had the stuff to win the ACC Coastal. The Hurricanes had never done it, he argued, so what made him think this group could get it done? Who was there to show them the way?

We figured out how to win games last year, was the essence of Quarterman’s reply. If you win all your league games, you’re probably winning the Coastal.

There’s not much mystery to the way this program operates under Mark Richt. The coach was successful as a Florida State assistant, won a lot of games in the SEC and was on several occasions a heartbeat away from an appearance in the national title game. That’s more than a lot of coaches can say, and so Richt has a system he believes works. He hired a bunch of good assistant coaches, and in Year 2 at his alma mater, has full belief that he’s on the right track.

This isn’t new territory for Richt

He’s been there: coached Heisman winners, SEC champions (when the SEC was the best league in the land, mind you) and racked up 10-win seasons. The only thing he hasn’t done is win a national title as a head coach, though he was on two staffs under Bobby Bowden at FSU.

So winning the Coastal, for Richt, seems like a simple task. Given the wealth of recruits in Miami’s backyard and the ongoing facility improvements – both a top-5 recruiting class and a new indoor practice facility are expected for 2018 – that should be the way of the future. It’s surprising the Hurricanes have never played for the ACC title game, and makes for an easy media-day storyline of Miami handling the weight of the expectations.

This team, under Mark Richt and this staff, feels different. They’re calm and confident, which comes from a coach who inarguably knows what he’s doing, at least as it relates to building a program into a consistent winner.

That’s why they should be erasing those doubts, and a lot sooner than later.