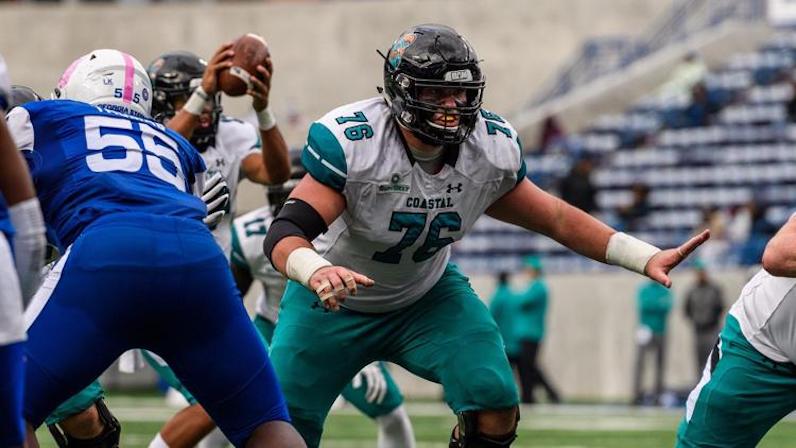 Transfer offensive lineman Brock Hoffman will not be able to play in the 2019 season at Virginia Tech. (Coastal Carolina athletics)

Virginia Tech will be without a potentially key piece on the offensive line this season. The final appeal from Brock Hoffman has been denied by the NCAA. Hoffman, a 6-foot-3 offensive guard, must sit out the 2019 season with a redshirt.

This is the final (unfortunate) update to a saga that’s gone on for nearly six months now. Hoffman likely would’ve started along the offensive line for Virginia Tech. He will be a redshirt junior during the 2020 season — with two more years of eligibility.

The NCAA has denied Brock Hoffman's final appeal for immediate eligibility, per Virginia Tech. He has no more avenues for a waiver. He’ll have to sit out this year. #Hokies

Hoffman played for two seasons at Coastal Carolina; he all 12 games at right guard during the 2018 season. He elected to transfer to Virginia Tech after the 2018 season — to be closer his mother, Stephanie. Hoffman’s mother had surgery to remove an acoustic neuroma — a non-cancerous brain tumor — in 2017.

Hoffman’s family resides in Statesville, North Carolina, which is five miles outside the 100-mile radius (from Blacksburg) allowed for medical hardship waivers by the NCAA. Initially, the NCAA cited that as a reason for not allowing immediate eligibility, though apparently it wasn’t a factor in the most recent ruling.

Turner, Hazelton ready to shine at wide receiver for the Hokies 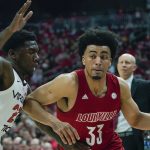 After three successful seasons at Louisville, combo forward and shooter Jordan Nwora will forgo his…