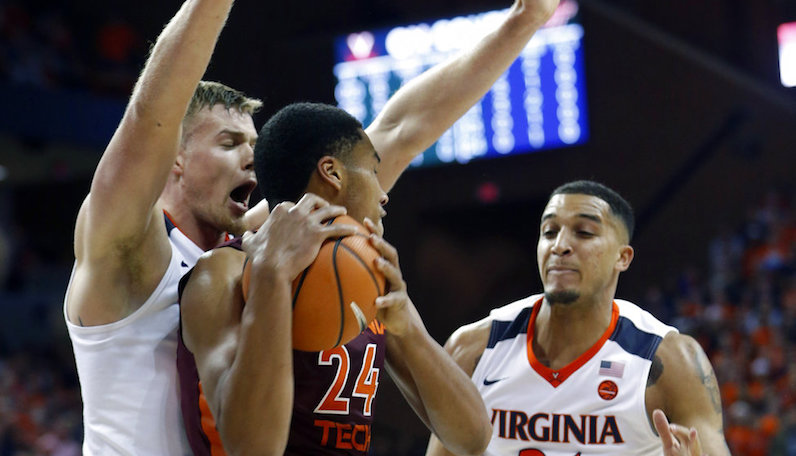 Defense has been the trademark of Tony Bennett’s teams since he arrived at Virginia nine years ago, and particularly since the Cavaliers embarked on their current run of success in 2014 that has led to three first-place ACC finishes in five seasons.

But even acknowledging that top-notch defense is to be expected, the 2017-18 Cavaliers are in the midst of a historically amazing defensive season.

Virginia is allowing a mere 52.1 points per game, which is not only best in the country, it is more than five points better than No. 2 Cincinnati. The Cavs adjusted defensive rate, according to KenPom, is a Division I best 83.6 points per 100 possessions — with Cincinnati second at 87.8. To put that in perspective, Ken Pomeroy has been tracking this metric since 2002 and no team has ever posted an AdjD rating better than 84.2.

And, oh yes, the last time Virginia took the floor it held Pittsburgh to seven first half points on 1-of-22 shooting and made the Panthers the third major conference team its held to less than 40 points in a game this season.

So what has helped this UVA basketball squad make the jump from typically excellent on the defensive end to perhaps the best defending team of the century? It may be that more than most years, even when the vaunted Pack Line Defense has one of its rare breakdowns, the Cavaliers are loaded with rim protectors to bail themselves out.

The teams that helped Virginia rise to the upper echelon of the ACC never relied heavily on shot blockers. The 2016 Cavs won the ACC regular season and made it all the way to the Elite Eight with conference defensive player of the year Malcolm Brogdon. That team blocked 119 shots through 37 games with Isaiah Wilkins leading the team with 31. This year, through 28 games, Wilkins has 42 of UVA’s 111 blocked shots.

Wilkins, Mamadi Diakite, Jack Salt — and Jay Huff when he gets to play — have all developed into intimidating rim protectors in the post. All four of those players have block rates above four percent. For an example: This means that when Wilkins is on the floor, he blocks 7.3 percent of opponent two-point field goal attempts, which ranks No. 84 in the nation, per KenPom.

According to Synergy Sports: In part because of UVA basketball’s shot blocking, opponents are scoring under 0.45 points per possession on post-ups — which is tops in Division I.

UVA Basketball: Puts the Panthers down in a Pitt

As Virginia was making its biggest defensive statement of the season at Pitt, the Panthers experienced the tough looks with an expiring shot clock typical of a Virginia opponent.

But what really demoralized Pitt was how more than once it appeared the Panthers had finally gotten an easy shot, only to see it swatted away by Diakite or Salt as the Cavs finished with seven blocks. That’s right — UVA blocked 33.3 percent of the two-point attempts it faced in that game. This is the second time this season Virginia has rejected over 30 percent of its opponents two-point attempts.

According to Sports Reference, the last time UVA basketball accomplished the feat was back in the 2014-15 season — in the second game of the season, a win over Norfolk State.

Last year’s Virginia team may have been an even better blocked shot group, swatting 138 shots — with guards Darius Thompson and Marial Shayok also adept at it; blocks won’t be the signature of this group, either. (This season’s team has a slightly lower block rate, per KenPom: 13.1 percent, down from 13.9 percent.)

But this may be the best combination of Pack Line execution combined with insurance at the rim that Bennett has ever had, making it no coincidence the Cavaliers sit atop most every defensive measure as well as the AP and coaches’ polls.

Who saw this coming: Devon Hall emerges as the ACC’s top two-way wing