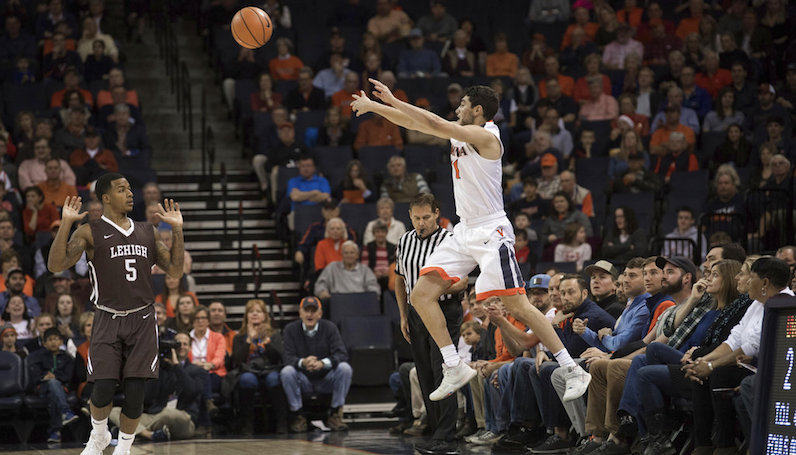 So far in the 2017-18 season, the Cavaliers offense has run much smoother with guards Kyle Guy and Devon “The Slow Cooker” Hall off to particularly good starts. Guy is averaging almost 18 points per game and Hall more than 13.

But don’t call UVA coach Tony Bennett greedy if he wants a bit more. He spent some time last week talking to the media about the possibility of a third consistent scorer emerging.

Countless successful basketball teams have been built around a “Big 3,” a trio of stars who generate offense and make it difficult for defenses to game plan against any particular individual.

Virginia has had multiple players make a case for a spot on the triumvirate — Isaiah Wilkins, Nigel Johnson, Ty Jerome, Mamadi Diakite and De’Andre Hunter have all had more than one double figure game — but none have delivered consistently on the offensive end.

The question is, does it matter?

“I don’t know if it’s one guy everytime,” Bennett said. “But I’d love to say, ‘This is our third scorer.’ One of our strengths is it could be different guys at different times. But, for us to be as good as we can, you don’t want to live and die on if Kyle is hot.”

So far, matchups have had a lot to do with who has stepped up for the Cavs. Wilkins spends so much energy on the defensive end his offense can suffer (call him the anti-Carmelo Anthony), but he has been able to exploit smaller four-guard lineups, such as when we went for 19 points against Rhode Island the day after Thanksgiving.

Hunter, as a bigger guard with a 7-2 wingspan, can create mismatches in other ways. Johnson, the offseason graduate transfer pick up, may be the other Cavalier most likely to go off for 20 or more on any given night.

But Johnson’s career, going back to his seasons at Kansas State and Rutgers, has been inconsistent coming up with the occasional huge game mixed in among mediocre to average nights.

Diakite continues to show flashes of great potential, but is still quite raw. Jerome has also had the occasional game where he heats up, but it is rare for Bennett’s primary point guard to be a volume scorer.

Virginia likely will have to continue to wait and see who the third scorer de jour might be. But that might not be so bad. It certainly gives opponents plenty to consider as they get ready for UVA.

Deck The Halls: UVA’s Devon Hall plays the best basketball of his career