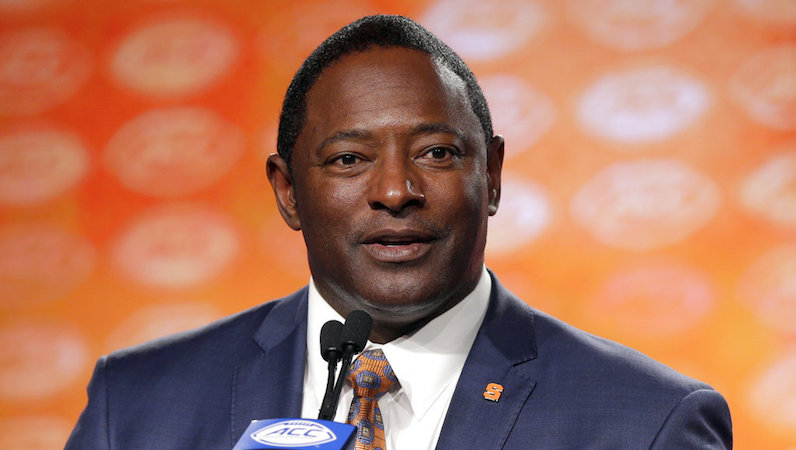 Syracuse’s coaching staff has extended scholarship offers to nearly 20 2018 quarterback prospects. Unfortunately for the Orange, however, all but a handful have committed elsewhere, including Connecticut standout Will Levis, who recently pledged to Penn State.

With training camp approaching, the Orange still have a small group of uncommitted senior quarterback targets. The list includes Kevin Doyle of Pennsylvania, Carter Bradley of Florida, and Steven Krajewski of Georgia.

At this late stage as far as quarterback recruiting, Syracuse’s best bets are with Bradley and Krajewski. Bradley earned a scholarship from Syracuse on June 6. A week later, the 6-3 pro-style signal-caller added another offer from West Virginia. Pitt, Rutgers, and Indiana are also in the mix.

Syracuse football offered Doyle back in the spring prior to his junior year. The Orange are battling it out with ACC rival Pittsburgh, as well as Ole Miss and a handful of others, for Doyle’s services. Syracuse doesn’t appear to be among Doyle’s current favorites, considering he hasn’t made his way to Syracuse for a visit.

With time dwindling down, though, the Orange could rapidly move up Doyle’s board as other options potentially fill up.

Can past help present?

One ace in Syracuse’s sleeve is the fact that Doyle’s current school, Malvern Prep, produced former Orange quarterback standout Ryan Nassib. Syracuse’s coaching staff has changed entirely from the time Nassib was playing for the Orange.

But the Malvern Prep staff can talk up the Syracuse football program to Doyle as a solid option, based on Nassib’s positive experiences.

Krajewski landed his offer from Syracuse in late April. He’s since landed an offer from Connecticut, as well as a couple FCS programs. Krajewski transferred from Michigan to Colquitt County High School in Moultree, Georgia as a tenth grader.

He didn’t put up eye-popping numbers last season, as he served mostly as a backup. But Krajewski went on to be named Top Quarterback at the Elite Georgia Showcase in mid-February, which raised his recruiting profile.

Syracuse should have a good shot of signing Krajewski if the coaching staff ramps up their intensity in the coming weeks. And without a large number of remaining options, it would make sense for the Orange to try and lock him up if they sincerely feel Krajewski is an ACC-caliber quarterback.

With projected 2017 starter Eric Dungey heading into his junior season, and his top backup, Zack Mahoney, a senior transfer, the Orange clearly need a 2018 quarterback signee. Behind Dungey and Mahoney are redshirt freshman Rex Culpepper and true freshman Tommy DeVito.

Given the adversity Syracuse has faced with injuries at quarterback in recent years, the thought of having just three scholarship quarterbacks heading into the 2018 season is a daunting one.

If all else fails

The possibility exists, of course, that the Orange could miss out on Doyle, Bradley, and Krajewski. In such a scenario, Syracuse football will have to search the JUCO ranks, or try to find a under-the-radar diamond in the rough, to fill this important spot.